Can selectivity of fragments be maintained?

In 2011 we highlighted an analysis of kinase inhibitors that demonstrated that non-selective fragments could produce selective leads, and vice versa. However, that study was based on hundreds of compounds not necessarily chosen from the same projects. Are the results the same within individual fragment-to-lead programs? This is the question that Ian Collins and colleagues at the Institute of Cancer Research address in a recent paper in MedChemComm.

The researchers examined three fragment-to-lead efforts: two targeted the kinase PKB and the other targeted the kinase CHK1. In all three cases they started with fragments and used structure-based design and fragment growing to obtain low nanomolar inhibitors. Importantly, they also obtained crystal structures of key compounds along the way, demonstrating that the initial fragment – a hinge-binding element – maintained its position and orientation throughout the process.

Each fragment, lead compound, and intermediate molecule was tested for selectivity in a panel of 91 kinases using a microfluidic mobility-shift peptide phosphorylation assay. The concentration of ATP in each assay was at the KM,ATP, and each compound was tested at 10-fold above its IC50 for the target kinase (so for example fragment 1 below was screened at 1000 μM, and fragment 5 was screened at 8 µM). For each compound a selectivity score was calculated based on the number of kinases inhibited at a certain threshold. For example, if S(30%) = 1, this would mean that all of the kinases were inhibited by at least 30% at the concentration tested, whereas if S(30%) = 0.03 this would mean that only 3 kinases (3/91= 0.03) were inhibited.

It's worth noting that selectivity is tough to define specifically. Although the selectivity score makes sense intuitively – each compound is tested at a concentration relevant to the intended target – I am concerned that it will make potent compounds appear more selective than they really are. Indeed, a plot of S(30%) versus -log[concentration tested] is fairly linear. (Compounds discussed below are labeled by number on the plot.) 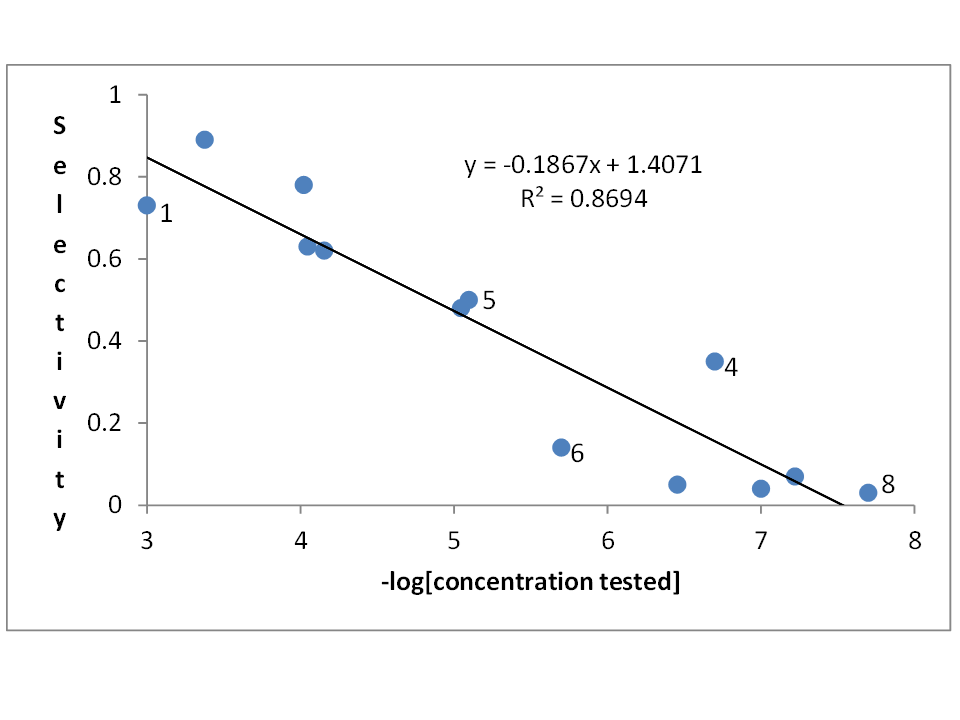 Accepting this definition of selectivity, though, it appears that nonselective fragments, such as 7-azaindole (fragment 1) could be progressed to nonselective leads such as compound 4, which was an early milepost en route to AZD5363, currently in Phase 2 clinical trials. 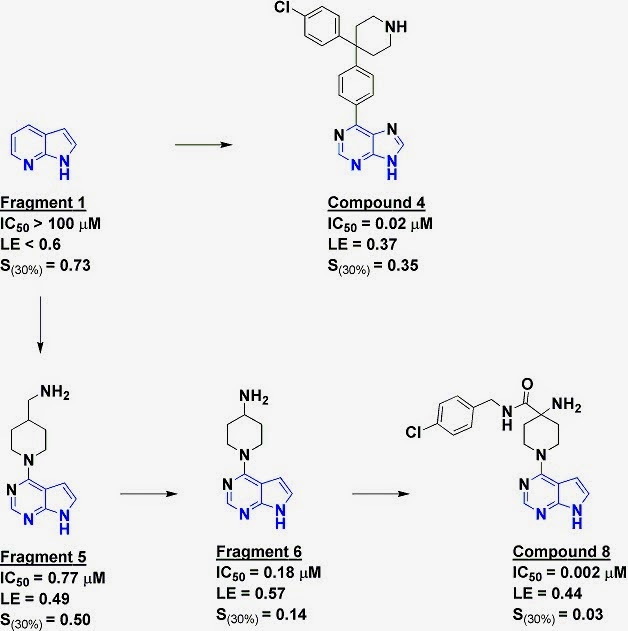 Fragment 1 was also modified to slightly less promiscuous fragment 5. A slight tweak to this molecule produced selective fragment 6, which was then optimized to the selective compound 8 (closer to AZD5363). In the case of fragment 6, even though the structural change was minor (removal of a single methylene) this was enough to make a specific interaction with a residue in PKB not found in other kinases. The CHK1 story is similar in taking a nonselective fragment to a selective lead.

So what’s the conclusion? The authors suggest that:

Broad kinase selectivity screens of fragments could be predictive of the lead, provided strategies to conserve the profile are followed in the elaboration, avoiding introducing new interactions with target-specific residues. Conversely, the initial fragment selectivity patterns are unlikely to reflect those of developed leads if the fragment does not already encode the anticipated target-specific interactions.

In other words, it depends. This is not meant as a criticism: I think this conclusion is about as decisive as possible when generalizing about fragment-to-lead strategies. At the very least, the work suggests that effort spent optimizing a fragment before growing or linking could be worthwhile. And even a promiscuous fragment may be only one atom away from something quite specific.
Posted by Dan Erlanson at 6:34 AM

I agree with Dan, it just depends. I am always getting questions about selectivity on this or that with fragments and it honestly just depends.