To have shape or not?

I consider the debate/discussion/civil discourse on what/where/when/why/how of 3D fragments to be one of the most interesting topics in the fragment field right now.  A paper has come out from the 3Dfrag consortium.  The first take away from this paper is we have a NEW acronym, FBHI (Fragment-based hit Identification).  Their central thesis is that fragments are too flat for certain target classes of targets, thus resulting in too low hit rates. This paper describes their efforts in pre-competitive space to prove/disprove this hypothesis.  It's fascinating.

Using the nPMI as their metric for "3D-arity" they compare 1000 fragments representation "commercial" space to Zinc InMan Compounds fragmented by RECAP.  It is obvious that InMan has more 3D-arity, but the question is always, is this biased by target type of compound type (like natural products)?  But, to the greater point, will 3D fragments give better hit rates than 2D for certain target classes?  Many people point to the Hann complexity model a (MIP) and say no, because there is more potential "bad" interactions.  However, the authors point out if the NUMBER of sites of interaction is the same, this should not be the case.  Recent data from Evotec seems to support this they state.

The 3Dfrag consortium's goal is to explore the role of "3D-arity" in fragment screening success.  As shown in this figure, they apply pretty standard selection rules for their collection, including the Pfizer Rule (medchemists inform on the final selection process). 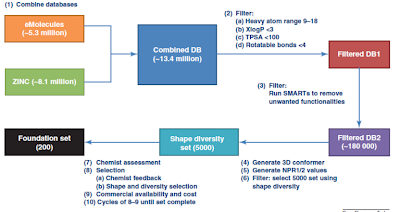 Interestingly, even after all of this, trying to select for "3D-arity", 70% of their final 200 molecules were largely flat (nPMI1+nPMI2< 1.1).  Making matters worse, 10% of the compounds could not be delivered by suppliers and 5% failed QC (by NMR). The nPMI and maximum similarity is shown below for 170 compounds.  For the maximum similarity, a right-shifted plot shows a high degree of internal similarity, while left-shifted would be more diverse.  So, it appears that their library is diverse (most compounds < 0.8).  Importantly, of the 170 compounds, they appear to fill a much wider region of 3D-space.

One of the tools generated by the consortium is 3Dfit, a webtool that is free and allows fragments to be evaluated.  They generate up to 9 conformers (blue to red, low to highest energy) that are then plotted on the PMI triangle.  They also calculate a radar plot of molecular properties:

Molecules outside the consortium's GUIDELINES are flagged for consideration (see (b)).  The consortium has now undertaken chemistry to generate additional 3D fragments.

As the authors state:

We believe that this strategy will build a library with broader coverage of biologically relevant chemical space compared with current fragment collections and the identified hits will offer higher-quality start points for medicinal chemistry projects.

They will now experiment and try to validate (or invalidate) this hypothesis.  But, as they point, these sorts of Pre-Competitive Initiatives have difficulty getting buy in from partners willing to devote time, resources, assets to this.  They are looking for more people to participate.  I have no skin in this game, but I would love to see people step up and help this initiative prove/disprove a crucial hypothesis in Fragments.