As many of you probably know, I am not a fan of virtual screening, computational design, in silico much of anything.  I think it tends to be poorly applied, or academic.  Now, don't mark me as a Luddite, I think that computational tools can be quite useful, when appropriately applied.  What is appropriate?  Read on and let Hoffmann-LaRoche-Nutley show you in this beautiful paper.

This is one of a line of great papers coming out of the closing Nutley site, so that is the one upside.  In this paper, the authors present how they leveraged the expertise of their chemists to design fragments against HCV NS5B, a well known drug target.  The story starts (I hesitate to say "their efforts start...") with a screen of 2700 fragments by SPR.  They identified 163 hits of which 29 were selected (criteria unstated) for co-crystallization.  Only one fragment delivered, 1. 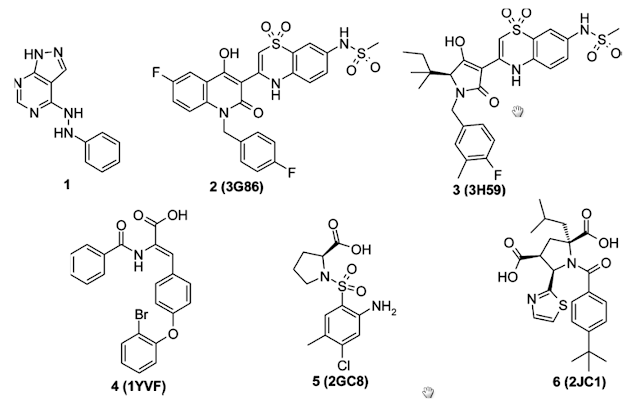 Fragment 1 had a 78uM KD, 130 uM IC50, but it could not be optimized for affinity, physicochemical or ADME properties at all.  They one important discovery from the co-crystal of 1 was an unexpected, and they believe, first ever interaction of its type: the NH hydrogen interacting with Q446 (Figure 1).


Using this and the published structures internally (2-3) and externally (4-6) the built a model. The following guidelines were proposed for the new fragments: 1. Satisfy carbonyl of Q446 and NH of Y448, optionally displacing or engaging the conserved water molecule, 2. Occupy large hydrophobic pocket, exploring its size, 3. Position aromatic chain to make edge to face interaction with Y448, 4. And at least one hydrophobic interaction with G410 and/or M414.
In a triumph of democracy and teamwork, the chemist woud discuss his ideas with the compchemist and have them modeled.  The ideas were presented to the team and the best ideas selected for synthesis.  They also chose to avoid acidic functionality.  Since 1 was the only known binder in the region without acidic functionality, they focused on incorporating the unique Q446 interaction.  What they found was that compounds capable of 1,2 and 1,3 interactions were best.  Table 1. shows their SAR. 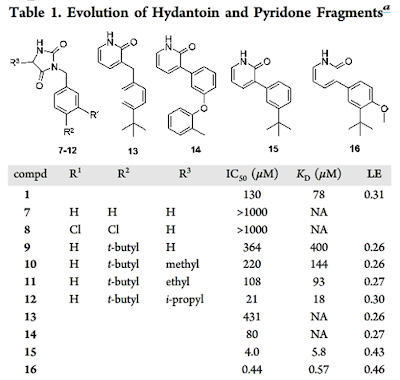 Their first two compounds were dead, dead as a this parrot.  Compound 9 satisfied 3 of the 4 criteria they established, yet showed very poor activity and bad ligand efficiency. Using LE was crucial, the authors state, because it allows the to distinguish affinity through bulk, vs. affinity through efficiency.  Finally, adding substituents to the hydantoin to explore the hydrophobic pocket showed significant increases in activity, e.g. 9->12.  Fragment 12 was co-crystallized and confirmed the expected binding mode.  A 2-pyridone fragment (13) gave similar activity to 9.  So, starting with a Pfizer-inspired compound gave 14 which demonstrated an increase in potency, but NOT ligand efficiency.   They next tried 15 and voila! a 100x increase in affinity with four less heavy atoms, the ligand efficiency went way up!  Co-crystallization showed that 15 bound as expected.  Two more heavy atoms added to 15 led to 16 and showed increased potency and ligand efficiency while retaining the desireable phyiscochemical properties of 15.  Compound 16 was further optimized and entered clinical trials with all of the atoms presented in it.


So, what makes this "Fragment Design Done Right" in my eyes?  In this case, they utilized fragment docking as an aid to chemist's designing ligands.  They used in silico tools, like modeling, to test the potentially validity of the chemist's hypotheses.  In the end, their computation was as good as their experimental follow up, in this case X-ray.  What differentiates humans from the brute beasts (except for all the exceptions out there where tool usage has been shown) is that we use tools.  Using tools correctly, is what differentiates the smart humans from the herd.

The one important discovery from the co-crystal of 1 was an unexpected, and they believe, first ever interaction of its type: the NH hydrogen interacting with Q446 (Figure 1).

The are lots of examples of NH of compounds interacting with main chain carbonyls. This may be novel for HCV NS5B, but not in general. It's a bit overplayed in my opinion.

Um, really? Did we read the same paper?

The authors specifically state that the NH donor to Q446 is novel in the context of this protein and this binding site. They certainly do not claim this is the first NH donor to a main chain carbonyl. And it's mentioned in all of a single sentence, so hardly "a bit overplayed".


It's a really nice paper. But thanks for bashing for no reason.

I too enjoyed this paper; Francisco Talamas gave a nice presentation about it at the ACS meeting in Philadelphia last year:

The marriage of medicinal and computational chemistry can be a beautiful thing when it works!