From fragments to inhibitors of the SARS-CoV-2 Nsp3 macrodomain

Two years ago we highlighted what was likely the largest crystallographic fragment screen against any target, the macrodomain (Mac1) of the nonstructural protein 3 (Nsp3) of SARS-CoV-2. Mac1 dampens the cellular immune response to viral infection by removing ADP-ribose from various proteins. Separate mutational studies suggested this enzyme could be a good target for treating COVID-19.
The 234 fragment hits identified in 2021 could serve as good starting points. This has proven to be true, as demonstrated in a paper just published (open access) in Proc. Nat. Acad. Sci. USA by Brian Shoichet, James Fraser, and collaborators at University of California San Francisco, University of Oxford, Diamond Light Source, Enamine, and Chemspace. Despite the wealth of fragment hits, none of them were particularly potent; the best had an IC50 value of 180 µM in a homogenous time-resolved fluorescence (HTRF) competition assay. In the new paper, the researchers leveraged computational methods to advance these fragments.
First, they explored a fragment-linking approach termed Fragmentstein. This entailed choosing pairs of fragments that bound in close proximity to one another, merging or linking them, docking them to ensure the new molecule would bind in a similar manner to the component fragments, and then searching make-on-demand libraries in Enamine’s REAL database. Four pairs of fragments were evaluated, and 13 of 16 designed compounds were synthesized. Eight of these confirmed crystallographically, and two showed low micromolar activity in the HTRF assay. Interestingly, both of these came from the same fragment pair, ZINC922 and ZINC337835. The best molecule was a mixture of diastereomers, and one of the pure stereoisomers turned out to be submicromolar.

The potency of this fragment is all the more impressive given the low affinity of the initial fragments, which could only be crystallographically characterized using PanDDA, a method to find low-occupancy ligands that we wrote about here. Unfortunately, the compound has low cell permeability, likely due to the carboxylic acid moiety. 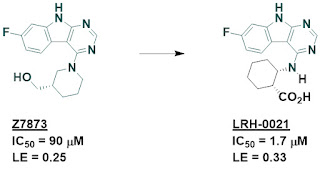 In addition to the linking approach via Fragmentstein, the researchers also conducted two virtual docking campaigns with more than 400 million molecules with molecular weights between 250-350 amu. Of 124 molecules purchased and tested, 47 confirmed crystallographically and 13 confirmed by HTRF, with IC50 values from 42 to 504 µM. (Ten of the 13 HTRF hits were also crystallographic hits. The researchers suggest the difference in confirmation rate is due at least in part to compound concentrations, which were 10-40 higher in the crystallographic screens.) In general the crystal structures confirmed the computationally predicted binding modes, particularly for fragments with measurable activity. Structure-based optimization of some of these fragments led to multiple low micromolar inhibitors, such as LRH-0021. Despite the carboxylic acid, this molecule is cell permeable.


This paper nicely illustrates how even very weak fragments can lead to multiple and very different series of inhibitors. The researchers acknowledge that the molecules are still at an early stage of development; indeed, they note that there are currently no good cellular assays to even assess the effect of Mac1 inhibition. Laudably, all the structures are deposited in the Protein Data Bank, which should provide a useful resource not just for further efforts on this protein but for understanding molecular interactions more generally.
Posted by Dan Erlanson at 6:22 AM