Fragments in the clinic: AG-270

A promising oncology approach is to target “synthetic lethal” proteins that are required for cancer cells but not for ordinary cells. Methionine adenosyltransferase 2A (MAT2A) is a metabolic enzyme that produces S-adenosyl methionine (SAM). Cancer cells lacking another gene, methylthioadenosine phosphorylase (MTAP), appear particularly dependent on MAT2A. In a recent J. Med. Chem. paper, Zenon Konteatis and colleagues at Agios, Viva, and ChemPartner describe the first clinical inhibitor of MAT2A.
The researchers began by screening >2000 fragments in pools of 20, each at 50 µM, using ultrafiltration. The 31 hits were tested in enzymatic and SPR assays, and compound 1 confirmed in both. Testing 54 commercially available analogs led to compound 2, with low micromolar activity, and this molecule was profiled intensively. 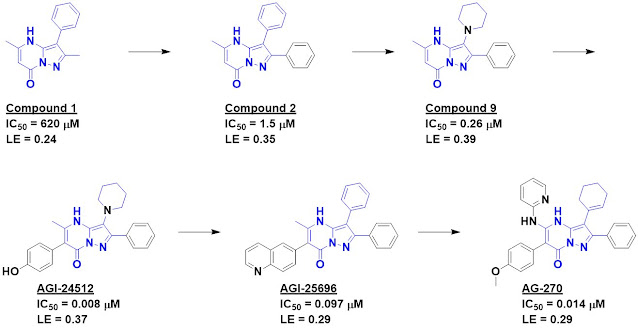 Kinetic studies revealed compound 2 to be non-competitive with respect to substrates ATP and L-methionine, and crystallography confirmed that compound 2 binds in a previously discovered allosteric pocket. The molecule makes polar and hydrophobic contacts to MAT2A and also displaces several water molecules. SAR studies found a preference for aromatic moieties at the 2-position of the central core, but the phenyl off the 3-position could be substituted with more shapely moieties such as the piperidine in compound 9.
Closer examination of the structure of compound 2 bound to MAT2A revealed a protein-bound water molecule, and displacing this with the phenol in AGI-24512 led to a satisfying boost in biochemical potency as well as cell activity. However, the molecule has poor oral absorption and a short half-life in rats. Metabolite identification studies pinned the blame on the piperidine, with the phenol no doubt doing no favors. Medicinal chemistry ultimately led to AGI-25696, which despite its lower biochemical activity was active in cells, metabolically stable, and showed efficacy in a mouse xenograft model when dosed orally.
Despite these favorable properties, AGI-25696 has very high protein binding in human plasma (>99.9%) as well as high efflux, which would likely necessitate a high clinical dose. The researchers proposed that, due to the weakly acidic nature of the molecule, it could tautomerize, and each tautomer could bind to different plasma proteins. Simply methylating the N-H led to decreased plasma protein binding but also lower binding to MAT2A. Thus, the researchers sought to shield the N-H by forming an intramolecular hydrogen bond. After appending more than 70 heterocycles they eventually arrived at AG-270, which has a more respectable plasma protein binding of around 98.5%.
Extensive characterization of AG-270 revealed it to be potent with good pharmacokinetics and oral bioavailability. It is relatively clean in a panel of 95 potential off-targets and showed tumor growth reduction in xenograft models. But it is not without warts: low solubility necessitated a spray-dried dispersion for animal dosing, not surprising giving its high lipophilicity. Nonetheless, the molecule has entered a phase 1 clinical trial in patients with MTAP loss.
This is a lovely fragment-to-lead success story with several lessons. First, although enzymes are sometimes considered “easy,” this is not necessarily true. Indeed, at an ACS meeting in 2018 Anil Padyana mentioned that metabolic enzymes in particular often have shallow, polar active sites. Targeting allosteric sites, as done here, can be a useful alternative.
Second, it is striking how the core of the initial fragment remains intact in the clinical compound, a reminder of the power of fragments to efficiently explore chemical space.
Finally, this story is another important reminder that affinity is often just the beginning of a long journey. It took considerable effort to optimize the pharmaceutical properties from AGI-24512 to AG-270, including a decrease in ligand efficiency. In the end the team has succeeded, and Practical Fragments wishes them – and the patients – luck in the trials.
Posted by Dan Erlanson at 6:12 AM