A long-running debate in the fragment world centers on the utility of “three dimensional” fragments. Proponents argue that these (often aliphatic) fragments may be more novel, have better physicochemical properties, and have more vectors for elaboration than “flatter” (mostly aromatic) molecules. Skeptics retort that hit rates are likely to be lower for these more complex molecules, and good luck making analogs. Two papers published late last year add more data to the debate.

The first paper, published in J. Med. Chem. by William Pomerantz and collaborators at the University of Minnesota and Eli Lilly, describes the results of a fragment screen against the bromodomain BRD4(D1), a popular member of the BET family. The 467 fragment library was enriched for shapely fragments as assessed by plane of best fit (PBF), which is the “average distance of a non-hydrogen atom from a plane drawn through the compound such as to minimize the average.” For example, "flat" benzene has a PBF of 0 while the cofactor NADPH has a PBF of 1.53.

The library was screened using ligand-observed (CPMG) NMR, and 34 hits were confirmed using protein-observed fluorine (PrOF) NMR. All of these were competitive with the known ligand (+)-JQ1, consistent with binding at the acetylated lysine recognition site. The average PBF of the hits was 0.44, essentially the same as the library itself (0.46). This is higher than the average PBF (0.36) of all fragments crystallized with BRD4 in the protein data bank.

Structures of all the hits are provided, and some of them are indeed quite unusual. The researchers characterized a substituted thiazepane crystallographically and were able to optimize this to a 32 µM binder with good ligand efficiency. This fragment was also selective against a handful of other bromodomains.

The researchers had previously screened BRD4(D1) under identical conditions with a more traditional, “flatter” library with an average PBF of 0.26. Interestingly, in that case the hits were less shapely than the library as a whole, with an average PBF of 0.17. The confirmed hit rate was also higher: 20% vs 7%. That said, the fragments in the traditional library tended to be smaller (averaging 180 Da vs 241 Da), so the molecular complexity of this library was likely to be lower, which could account for the higher hit rate.

The second paper, published in Bioorg. Med. Chem. Lett. by Ulrich Grädler and collaborators at Merck KGaA, EMD Serono, Edelris, and Proteros, focuses on cyclophilin D (CypD), which has been implicated in cardiovascular disease and multiple sclerosis. Unlike BRD4, this is a tough target: an HTS screen of 650,000 compounds in a biochemical assay yielded just 178 hits, none of which confirmed. Undeterred, the researchers screened 2688 fragments by SPR at 2 mM, resulting in 58 confirmed hits, all quite weak (millimolar). Crystallography was attempted on most of them, yielding six structures, including such shapely specimens as compounds 3 and 7. 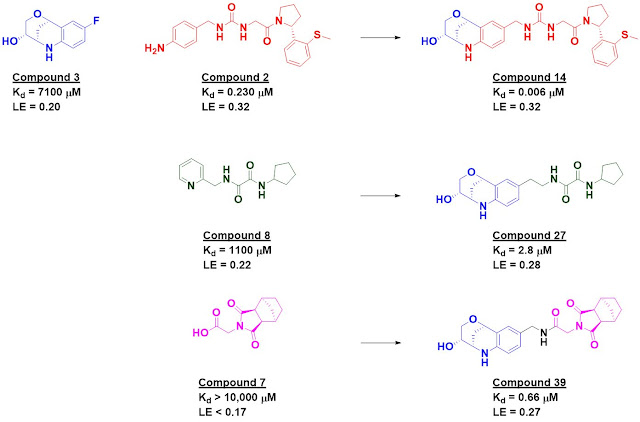 Compound 3 binds in the lipophilic S2 pocket of CypD, overlapping with the aniline moiety of previously reported compound 2. Fragment merging led to compound 14, with nearly 40-fold improved affinity over compound 2. A similar strategy merging compound 3 with fragment 8 led to low micromolar compound 27, two orders of magnitude more potent than the starting fragments. Perhaps most impressively, fragment linking compound 3 with compound 7, a shapely fragment which binds in the S1’ pocket, led to submicromolar compound 39, with affinity more than 10,000-fold higher than either fragment.

So in the end, fanciers of shapely fragments and detractors alike can feel vindicated by these papers. Hit rates might be lower for three dimensional fragments, but the resulting hits are likely to be less precedented. In the case of CypD, a shapely fragment led to three different series for a target that had resisted HTS. Of course, there is still some way to go: no cell, permeability, or stability data are provided for any of the molecules, and medicinal chemists may blanch at the seven stereocenters in compound 39. But these are interesting starting points, and it will be fun to see where they end up.
Posted by Dan Erlanson at 6:15 AM

Hi Dan, I think that both sides are missing the point with respect to ‘3D fragments’. While some of the studies that claim to show benefits for ‘3D-ness’ are hamstrung by some truly execrable data analysis, the case for more ‘3D-ness’ in screening libraries should be based on consideration of molecular recognition and coverage of chemical space. Molecular complexity does need to be managed carefully in any fragment library and I would conjecture that this is more of a challenge for sp3-rich frameworks. The molecular complexity of fragments 3 and 7 does look excessive for a generic screening library. Not all vectors are exploitable when rings are flexible and I would generally favour bicyclic systems as an approach to increasing ‘3D-ness’.

Hi Peter, totally agree. That's exactly why (when designing our library) we added 3D-ness as another diversity angle in addition to chemical and pharmacophoric diversity, please refer to this 2016 book chapter: https://onlinelibrary.wiley.com/doi/10.1002/9783527683604.ch05

“While the data analysis in LBH2009 [23] has been criticized, the suggestion that we need to look beyond aromatic rings is still valuable, although the rationale for doing so is based more on molecular recognition and diversity than aqueous solubility. One limitation of aromatic rings as components of drug molecules is that some regions above and below the plane defined by the atomic nuclear positions are not directly accessible to substituents. Molecular recognition considerations suggest a focus on achieving axial substitution in saturated rings with minimal steric footprint, for example by exploiting the anomeric effect or by substituting N-acylated cyclic amines at C2. Atoms have been known [24] for some years to behave as if they have volume and it would be more correct to say that benzene has constant or uniform thickness rather than describing it as flat or 2-dimensional.”