Our latest poll has just closed, and the results are quite interesting. We asked three questions:

First, a paragraph on methodology. The poll ran from November 3 through December 7. Due to the limitations of the free version of Crowdsignal (formerly Polldaddy), I have no way of knowing how many individuals responded to questions 2 or 3 (respondents could choose multiple answers). This was the purpose of question 1; 37 people answered yes, and 12 people answered no. Assuming that only people who answered yes answered questions 2 and 3, I divided the responses to questions 2 and 3 by 37 to give percentages. So for example, 33 people would recommend Enamine, which is 89%. If some people who answered no to question 1 answered 2 and/or 3, or answered questions 2 and/or 3 but not 1, the percentages may be overestimates. This seems possible, as the total number of people who would recommend or avoid Enamine adds up to 36. So either nearly everyone who said they bought fragments did so from Enamine, or more people responded than were accounted for by answering “yes” to whether they purchased fragments.

The results are shown here. 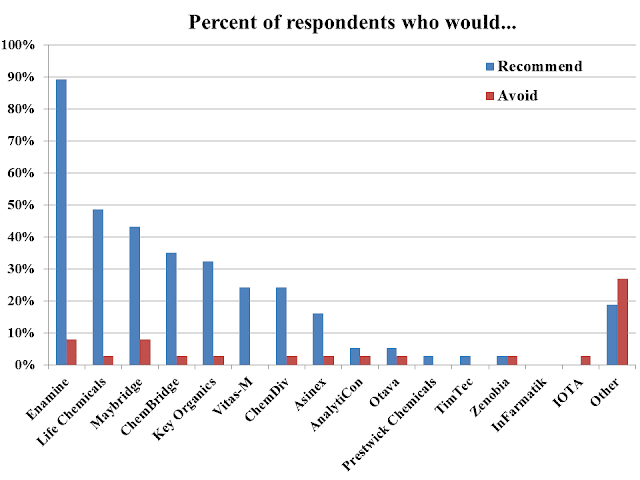 The second observation is that, for the most part, people seem fairly happy with their vendors: each named vendor would be avoided by fewer than 10% of respondents. That said, the relative numbers vary considerably: only one respondent would avoid Life Chemicals, while 18 would recommend them. In contrast, for some of the less popular suppliers, the number of people who would avoid them was comparable to the number who would recommend them.

Finally, I was pleased to see that although a few respondents selected “other” for vendors they would recommend, these were outnumbered by the number selecting “others” they would avoid. That suggests the list provided in the poll captured most trusted vendors. That said, there is no way of knowing whether, for example, the 7 respondents who chose to recommend “other” vendors all had the same vendor in mind, or up to 7 different ones.

Of course there are caveats (and more in the methodology section above). First, the response rate is lower than most of our other polls, reflecting the fact that library generation is not something done lightly or frequently. Second, the first question was deliberately vague; people may have different definitions of “past few years,” and some vendors may have improved or deteriorated. Third, we have no way of knowing how many organizations are represented; if many people responded from a single company this could bias the results. Fourth, we are dependent on the honesty of respondents – we don’t know whether vendors recommended themselves.

Finally, please leave comments, positive or negative, especially if you would recommend vendors not included in the poll. Remember, you can comment anonymously.
Posted by Dan Erlanson at 6:05 AM

Thank you for an insightful review.

Does anyone know about whether Zenobia is is still active? We purchased two fragment library. Now we need 10 follow on compounds and few libraries, but they are inaccessible.