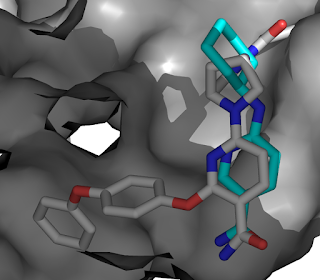 We have previously described examples of covalent fragments being used to target kinases, but these new papers are a useful reminder that it is also possible to start with ordinary non-covalent fragments and introduce a warhead later. Or not – as we highlighted in 2015 regarding a noncovalent BTK inhibitor from Takeda. The possibilities are limited only by your creativity.
Posted by Dan Erlanson at 8:10 AM

"A crystal structure reveals that B16 (gray) binds in a similar manner to the initial Fragment A (cyan)."

Hi Joe,
Thanks for the comment. The gray structure is actually compound 16 in the paper (pdb 6DI5), though as depicted it does indeed look deceptively like compound 7 - sorry about that!