Our latest poll asked just this question. We received 72 responses, and the results are shown here. 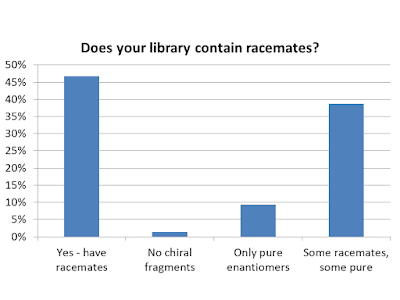 Only about 10% of respondents said that all chiral fragments in their library are pure enantiomers.

And perhaps most surprisingly, only a single respondent said he or she doesn’t screen chiral fragments at all.

Personally I like racemates because they present an easy follow up experiment: if the two enantiomers have different activity, you are more likely looking at genuine activity as opposed to some sort of artifact.

Of course, these poll results don’t tell how many chiral compounds are in the typical library. One source told me that his organization's 5000 molecule collection does contain chiral fragments - but only about 20 of them. It will be interesting to see whether we start to see more chiral fragments appear in fragment success stories.
Posted by Dan Erlanson at 6:15 AM