Earlier this year we highlighted a paper from Novartis in which ligand deconstruction was used to deconstruct an HTS hit against the epigenetic target methyltransferase polychrome repressive complex 2 (PRC2). In a new J. Med. Chem. paper, Ying Huang and Novartis colleagues report a similar approach on a different HTS hit, ultimately yielding a promising chemical probe.

Compound 7 was identified as one of about 1400 hits from a high-throughput biochemical screen of 1.4 million molecules (described here at PLOS ONE). Crystallographic studies revealed that, like the previous molecule, this one also binds in the site on the EED subunit of PRC2 that normally recognizes trimethylated lysine 27 on histone H3.

Crystallography also suggested that the left half of the molecule didn’t seem to be making productive interactions with the protein. Lopping this off actually increased the activity and dramatically improved the ligand efficiency. Fragment-sized compound 8 was then subjected to extensive medicinal chemistry, ultimately resulting in EED226. Crystallography revealed that the binding modes of the initial hit and the final molecule are quite similar. 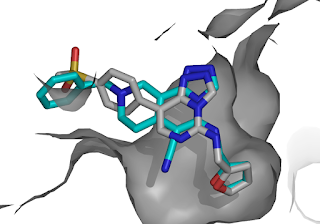 A separate paper in Nat. Chem. Biol. further characterizes EED226. A chemoproteomics study of a labeled version of EED226 revealed that it is remarkably selective for the PRC2 complex in human cell lysates. Also, EED226 is active against mutant cell lines that are resistant to other PRC2 inhibitors currently in the clinic, which are competitive with the cofactor rather than the trimethylated lysine residue. In fact, EED226 can bind to the PRC2 complex simultaneously with these other inhibitors, so dosing both together could give improved efficacy and slow the emergence of resistance.

As with the previous post on this target, the discovery of EED226 is a nice example of fragment-assisted drug discovery (FADD). Unlike that case, in which fragmentation led to an initial loss in potency, here trimming back the molecule paid immediate dividends.

Artists often talk about finding a sculpture within a stone by cutting away excess material. It is rewarding to see that chemists can use the same strategy.
Posted by Dan Erlanson at 5:55 AM