Three years ago we highlighted work out of Chris Abell’s lab at the University of Cambridge targeting CYP121, an important enzyme for the pathogen Mycobacterium tuberculosis (Mtb). Two new papers from his group discuss progress on this target using conceptually similar approaches.

A previous fragment screen had identified some very weak fragments, and merging had led to low-micromolar compound 2 – the starting point for a (free access) J. Med. Chem. paper by researchers at Cambridge, the University of Manchester, the Francis Crick Institute, and São Paulo State University. The researchers used a “retrofragmentation” or deconstruction approach: systematically dissecting the molecule into component fragments (such as compounds 4 and 5) to see which bits were most important. Group efficiency analyses revealed that the two lower aromatic rings were important, while the upper one was much less so. 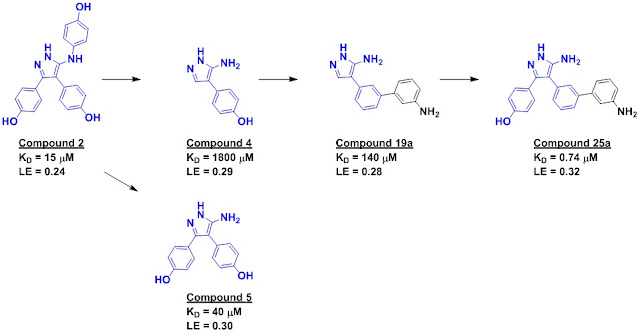 Crystallography revealed that compound 2 did not make direct interactions with the active-site heme molecule in CYP121, so the researchers sought to create some by growing out from compound 4. This led to a nice increase in affinity (compound 19a). Incorporating the other ring led to compound 25a, with sub-micromolar affinity as measured by isothermal titration calorimetry (ITC). Of course, heme is common to every CYP – including those found in humans – raising the question of selectivity. Happily, compound 25a turned out to be reasonably selective for CYP121 compared with a panel of Mtb and human enzymes.

There’s lots more in this (30 page!) paper, including extensive SAR supported by crystallography, ITC, native mass spectrometry, and an interesting spectroscopic binding assay. But unfortunately, the compounds are not active in a cellular assay, and the researchers are trying to figure out why.

The second (open access) paper also takes a deconstruction approach, this time starting from the substrate cYW. Fragmentation of this and related cyclic dipeptide substrates into amino acid derivatives and analogs led to the testing of 65 commercial compounds in a thermal shift assay, resulting in seven hits that increased the denaturation temperature by more than 1 °C. Compound 1a was the most stabilizing, and a spectroscopic assay suggested interaction with the heme group.

The spectroscopic assay also revealed a high micromolar affinity for the fragment. Attempts to improve this ultimately led to compound 31, with comparable affinity as cYW but with improved ligand efficiency. The thioester could be replaced with only a modest loss in potency, and interestingly the stereochemistry of these molecules did not seem to make a difference. Compound 31 was also reasonably selective for CYP121 in a panel of other CYPs.

Both papers cover lots of ground. Reading some publications you can be lulled into thinking that FBLD is an easy progression of increasingly potent compounds. These examples are useful reminders that many compounds turn out to be dead ends, and that even potent and selective molecules may not have the desired biological effects. Sometimes doing everything right can still leave you short of the goal – at least for a while.
Posted by Dan Erlanson at 6:12 AM

"Retrofragmentation"? Funny, when I was just a lad, we called this approach "medicinal chemistry ".