Way back in 2010 we highlighted work out of Seth Cohen’s lab at UC San Diego on “metallophilic fragments”, which are specifically designed to bind to metal ions. As long as one avoids PAINS, the approach could be useful for targeting metal-dependent enzymes. Indeed, multiple drugs derive much of their affinity by binding to metals; these include HDAC inhibitors (for cancer) and integrase inhibitors (for HIV). In a recent paper in J. Med. Chem., Cohen and colleagues describe work against an influenza target.

The researchers were interested in the so-called “PA subunit” of RNA-dependent RNA polymerase, which is both essential and highly conserved among influenza strains. The endonuclease in the PA subunit requires two metal ions, either Mn2+ or Mg2+, and in fact previous publications had demonstrated that metal chelators could inhibit the enzyme. In the current paper, the team screened about 300 fragments at 200 µM in an activity assay; those that inhibited >80% were retested to produce dose-response curves. Compound 1 came in as reasonably potent and impressively ligand-efficient, as is often the case with metal-binding fragments. Docking studies suggested that it could bind to both of the metal ions in the active site. 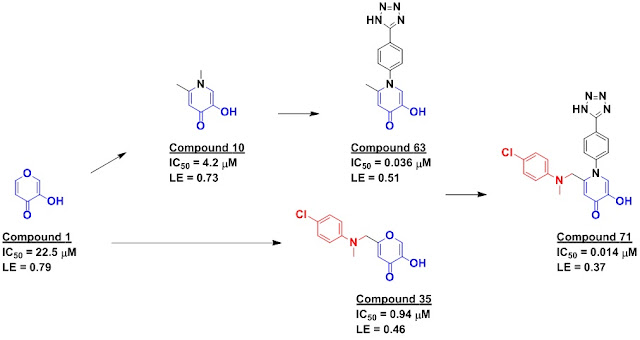 Initial SAR around compound 1 led to compound 10, with a significant improvement in potency that the researchers attribute to increased basicity and thus stronger interactions with the metals. Taking pieces from previously published molecules led to another increase in potency (compound 63). Separate fragment growing efforts off compound 1 led to sub-micromolar inhibitors such as compound 35. Combining both series led to compound 71, which is the best of the bunch with low nM activity, though it fell short of the hoped-for additivity of binding energies.

Compound 71 was also tested in cellular assays. Happily, it was able to protect cells from a lethal dose of influenza virus with an EC50 in the low micromolar range, about 100-fold below the cytotoxic dose observed in the same cell line. Of course, there is still a long way to go: no pharmacokinetic data are provided, and selectivity against other metalloproteins may be a challenge. Still, it will be interesting to watch future developments, both with this series and with the approach in general.
Posted by Dan Erlanson at 5:58 AM