The researchers were interested in the protein KEAP1, which binds to and blocks the activity of the transcription factor NRF2. Small electrophilic molecules covalently react with KEAP1, causing NRF2 to dissociate and upregulate various cytoprotective genes, which could be useful for a variety of diseases. Indeed, this is at least partly how the approved drug dimethyl fumarate seems to work. However, dimethyl fumarate is quite reactive; a more specific molecule could have a better therapeutic profile, and would certainly be useful for probing the complex biology. With this in mind, the researchers sought a non-covalent inhibitor.

NRF2 interacts with a bowl-shaped “Kelch domain” of KEAP1 largely through electrostatic interactions. Thus, not only is this a challenging protein-protein interaction, coming up with a cell-permeable molecule is all the more difficult. The researchers soaked crystals of the Kelch domain against 330 fragments overnight at concentrations of 5-50 mM. Fragments were observed binding in three adjacent hot-spots, and although no functional activity could be detected, the binding modes suggested a path forward.

Growing from fragment 1 toward a hot-spot occupied by an aromatic fragment (magenta below) led to compound 4, with detectable activity in a fluorescence-polarization assay as well as clear binding in an isothermal titration calorimetry (ITC) experiment. Growing compound 4 toward another hot-spot occupied by a sulfonamide-containing fragment (green below) led to the sub-micromolar compound 6, and further optimization resulted in the low nanomolar compound 7. As is often (but not always) the case, the fragment portion of the final molecule binds in virtually the same position as the initial fragment 1 (blue). 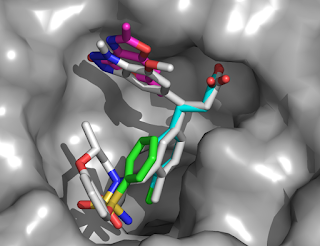 Comparison with the structure of the NRF2 peptide reveals that the carboxylic acid in compound 7 binds in a very similar fashion to a glutamate residue in the peptide, and some of the other peptide contacts are also mirrored, but with very different moieties. Importantly, compound 7 has only a single negative charge, balanced lipophilicity, and fills the binding pocket more effectively than the peptide. These properties translate to good biological activity in multiple different cell-based assays, where the compound causes NRF2 translocation to the nucleus, upregulates appropriate gene expression, and prevents glutathione depletion when cells are treated with an organic peroxide. Although the pharmacokinetics have yet to be optimized, it also shows encouraging activity in a rat model of ozone exposure. Finally, it is reasonably selective in a panel of 49 undesirable off-target proteins. All these properties make this at least an excellent chemical probe.

There are several important lessons in this paper. First, as we’ve noted previously, it is possible to replace a highly polar peptide with a much more drug-like molecule. Second, fragments don’t need measurable affinity to be useful starting points. Crystallography is ideally suited for finding such fragments, though Astex researchers reported a similar success story with NMR last year. Finally, progressing these fragments won’t necessarily be easy, as reflected in the 25 authors on the paper. That said, such intensive efforts can pay off, as illustrated last month by the approval of venetoclax against another difficult protein-protein interaction.
Posted by Dan Erlanson at 6:03 AM