Yesterday the US FDA approved venetoclax (VenclextaTM) for certain patients with chronic lymphocytic leukemia (CLL). This drug, which readers may know more familiarly as ABT-199, was co-developed by AbbVie and Genentech. The drug binds to BCL-2 and blocks its interaction with other proteins.

The first fragment-derived drug approved, vemurafenib, illustrated how quickly FBDD could move: just six years from the start of the program to approval. In contrast, venetoclax is the culmination of a program that has been running for more than two decades; Steve Fesik and his colleagues at Abbott published the X-ray and NMR structure of the protein BCL-xL back in 1996! The original SAR by NMR work was done on this protein, leading to ABT-263, which hits both BCL-xL and BCL-2. Subsequent work revealed that a selective BCL-2 inhibitor might be preferable in some cases, and further medicinal chemistry led to venetoclax. 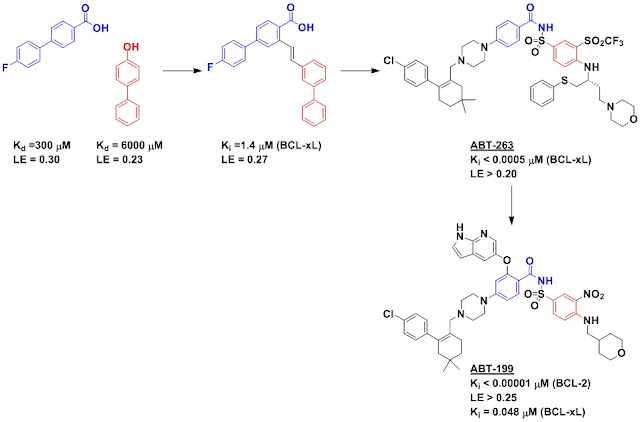 This drug illustrates the power of fragments to tackle a difficult target by accessing unusual chemical space. It also illustrates creative, fearless, data-driven medicinal chemistry: not only does venetoclax violate the Rule of five, it even contains a nitro group, a moiety red-flagged due to its potential for forming toxic metabolites. This is a useful reminder that in our business rules are more appropriately considered guidelines, to be discarded when necessary.

Clinical results were sufficiently impressive that the drug was given breakthrough status and granted priority review, accelerated approval, and orphan drug designation. The ultimate victory is for the thousands of patients with relapsed CLL who have the 17p deletion on chromosome 17. In the registration trial, 80% of patients showed a partial or complete remission. It is rare to create something that works this well. Congratulations to all who played a role.
Posted by Dan Erlanson at 3:36 PM