The blood coagulation cascade involves several serine proteases, many with an appetite for arginine-containing peptides. The polar, basic guanidine moiety of arginine tends to wreak havoc on the pharmacokinetic properties of small molecules, sparking an intensive search for replacements. A few months ago we described how researchers were able to use fragment screening to find an alternative moiety for one member of the blood coagulation cascade. In a recent paper in J. Med. Chem., Daniel Cheney and colleagues at Bristol-Myers Squibb report their work on another, factor VIIa.

The researchers started by filtering commercially available small molecules to look for those with ≤ 17 non-hydrogen atoms, ≤ 3 rotatable bonds, and without anything nasty. This computational work left them with 18,000 fragments. These were then clustered based on similarity, and 200 compounds were chosen by chemists as having the potential to bind in the deep S1 pocket, where the guanidine normally binds.

At the same time, the 18,000 fragments were computationally docked (using Glide) against several different crystal structures of factor VIIa; this “ensemble docking” was used to account for the protein flexibility observed in various structures. This led to a further 250 fragments being chosen.

The 450 fragments were then assessed in biochemical and STD NMR-based assays, and 41 were soaked into crystals of factor VIIa, resulting in 27 structures with fragments bound in the S1 pocket. Happily, 12 of these fragments were – unlike guanidine – neutral. All of them were quite weak (even by fragment standards), with Ki values ranging from 8-19 mM, though searching for related fragments led to some with slightly improved affinities. However, when examining the binding mode of fragment 7, the researchers realized they could use it to replace a more basic moiety in their existing lead series (17), yielding compound 18. Although this reduced the potency, it dramatically improved the permeability. Also, the researchers stated that they were able to subsequently improve the potency, with details to come in a subsequent paper. 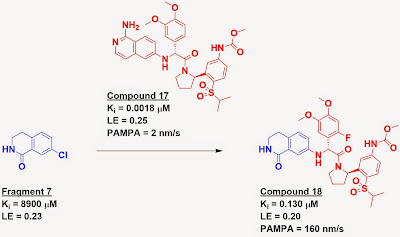 This is another nice example of using fragments to fix part of a larger molecule, though it is not necessarily easy. The researchers note that other attempts to append new fragments onto their existing scaffold were unsuccessful, likely due to geometric incompatibilities. This paper is also an illustration of how long it can take to get things published. One of the authors gave a nice presentation on some of this work at an ACS meeting in 2012, and there’s a line in the paper referring to a publication that came out “shortly after completion of this work” – in 2006! Still, late or not, it is nice to see the story in print, with a promise of more to come.
Posted by Dan Erlanson at 6:23 AM