One of the more exciting phenomena in fragment-based approaches is synergy (or superadditivity), in which the binding energy of linked fragments is greater than the sum of the binding energies of the individual fragments. Extreme cases are relatively rare, and the underlying thermodynamics can be counterintuitive, so it is always fun to see new examples. Cosimo Altomare and collaborators at the of and Consiglio Nazionale delle Ricerche () describe one in a recent paper in J. Med. Chem.

The proteases factor Xa (fXa) and thrombin (fIIa) are two heavily-studied anticoagulant targets. The paper characterizes a previously described molecule (compound 3) that is selective for fXa but still potent against fIIa, leading to good anticoagulant activity in human plasma as well as profibrinolytic activity. The researchers took a fragment deconstruction approach to better understand the binding to both targets. 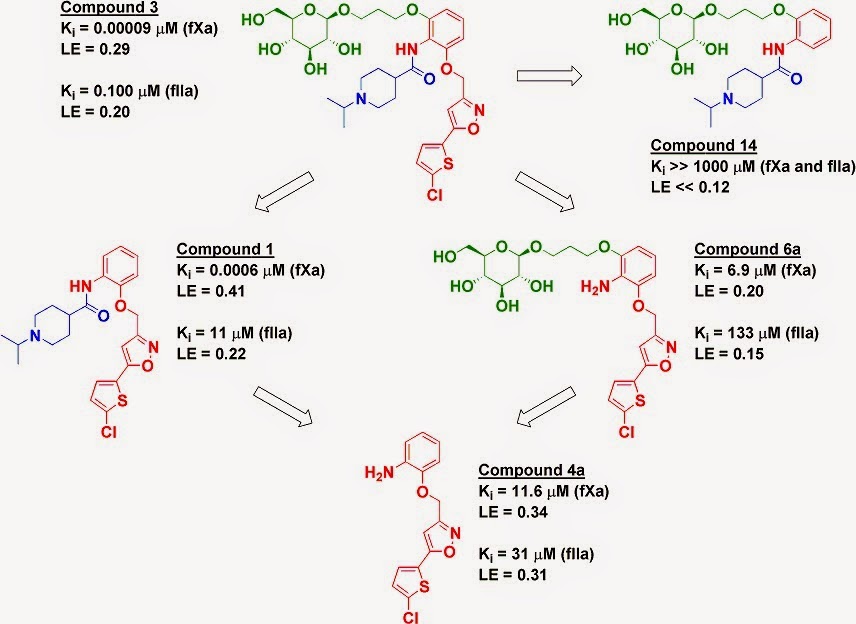 However, these results are context-dependent. Removing both the piperidine moiety and the glucose moiety gives compound 4a, which has similar activity against fIIa as compounds 1 and 6a, where only a single moiety has been removed. In fact, compound 4a (without the glucose) is actually slightly more potent than compound 6a (with the glucose) against fIIa. But, as mentioned above, adding the glucose to compound 1 gives an impressive 110-fold boost in affinity for fIIa. In comparison, a famous early example of cooperativity in an NMR by SAR study gave only a 14-fold boost.

The researchers solved the crystal structure of compound 3 bound to fIIa, which reveals several hydrogen bond interactions between the glucose moiety and amino acid residues that have been previously implicated in allosteric activation of the protein. Perhaps compound 3 is exploiting this allosteric mechanism to bind more tightly.

This is a careful, thorough study and serves as a useful reminder that cooperativity can be huge, but it is still difficult to explain, much less predict.
Posted by Dan Erlanson at 6:15 AM