One of the more popular applications of fragment-based lead discovery has been targeting protein-protein interactions. Among these, the BCL-2 family of anti-apoptotic proteins has proven particularly successful, as exemplified by several compounds in clinical trials against various cancers. SAR by NMR was used in the discovery of the chemical series that ultimately led to navitoclax, which inhibits both BCL-XL and BCL-2, and subsequent medicinal chemistry led to a selective inhibitor of BCL-2, which is now in phase 3 trials. In a recent paper in ACS Med. Chem. Lett., Zhi-Fu Tao and dozens of collaborators at AbbVie, Genentech, The Walter and Eliza Hall Institute of Medical Research (WEHI), and the University of Melbourne describe how fragments contributed to a specific inhibitor of BCL-XL.

High-throughput screening and medicinal chemistry at WEHI initially led to compound 1, a selective inhibitor of BCL-XL, which was optimized to the potent WEHI-539 in collaboration with Genentech. This molecule had some pharmacokinetic liabilities, so, in collaboration with AbbVie, the researchers came up with compound 4. To optimize this molecule further, they turned to SAR by NMR, which entails screening fragments in the presence of an initial binder to find fragments that bind to a second site. 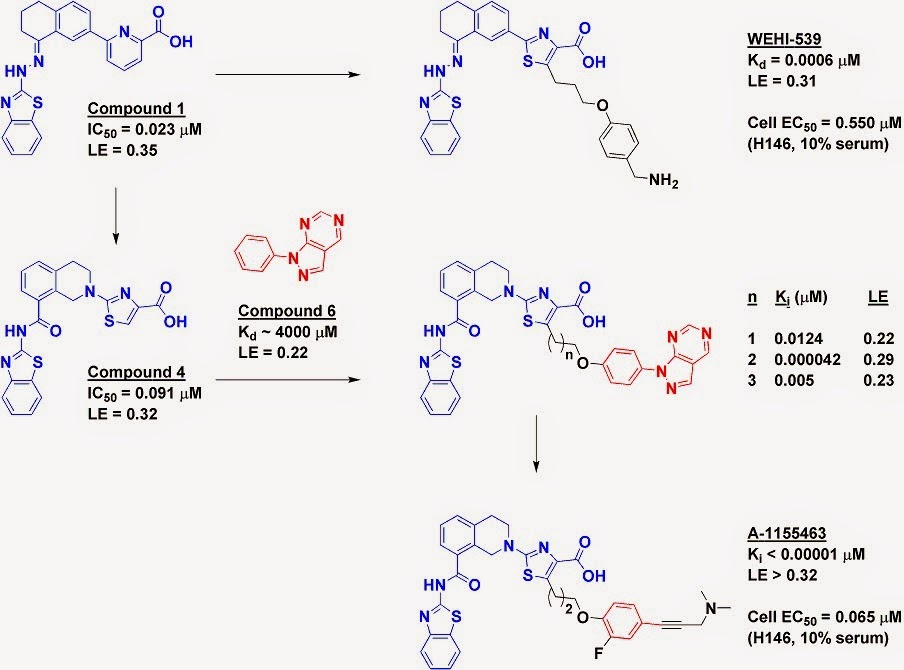 The researchers used 2-dimensional NMR (1H–13C-HSQC) to screen a complex of BCL-XL and compound 1against 875 highly soluble fragments in pools of five, with each fragment present at 5 mM! Compound 6 was one of the better binders, and NMR-guided docking revealed that it bound close to compound 1, suggesting a fragment linking approach. This proved successful, though as with many linking studies it was critical to get the linker just right: shortening or lengthening the linker by a single methylene decreased affinity by more than two orders of magnitude (middle right).

Although remarkably potent, the best linked compound is also quite lipophilic (ClogP = 6.2), and adding human plasma to the assay caused a marked loss in potency, suggesting it gets sopped up by serum albumin. Previous work on navitoclax had shown that introducing a basic amino group could decrease binding to albumin, and doing this while simplifying the fragment ultimately led to A-1155463, which showed extraordinary biochemical and cell-based potency as well as on-target activity in mice.


This seems to be a classic case of fragment-assisted drug discovery, where fragments played a supporting role in a larger medicinal chemistry program rather than taking center stage. In this case one could argue that the role was relatively minor, and that it may have been possible to use conventional approaches to get from WEHI-539 to A-1155463. Nonetheless, the information provided by the fragments likely led to a fuller understanding of the binding pocket, and in difficult targets like this it is important to use all the tools at one’s disposal.
Posted by Dan Erlanson at 6:34 AM