Of all the topics on Practical Fragments, none have generated as much Sturm und Drang as ligand efficiency (LE) and related metrics. But how are researchers actually using these? The results of our latest poll are in, and it appears that ligand efficiency is still widely used. 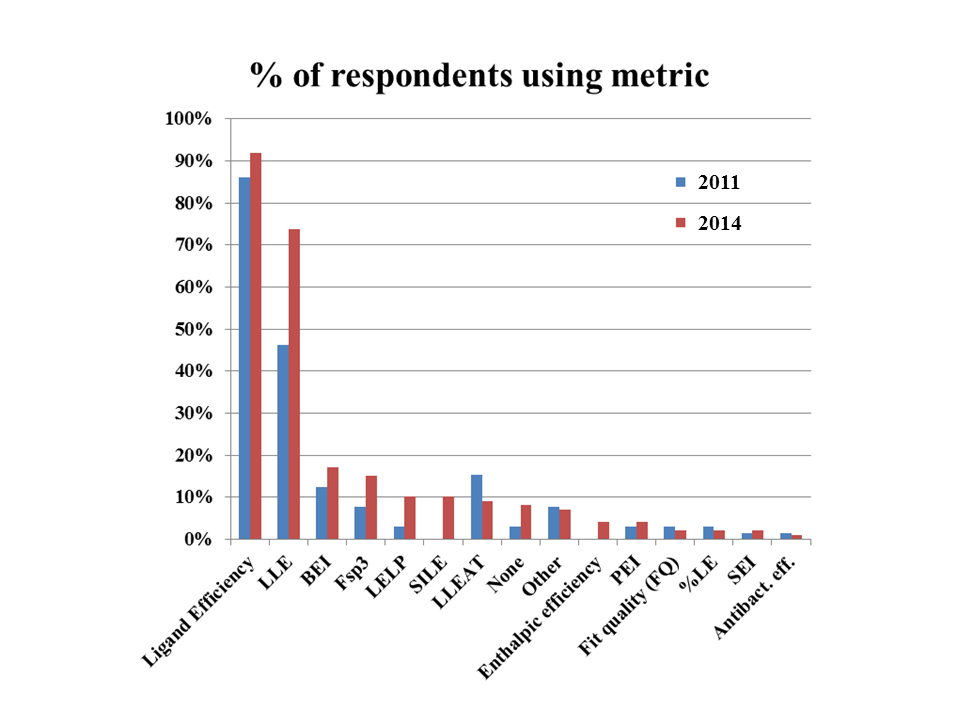 Lipophilic ligand efficiency (LLE or LipE) has made significant strides in the past 3 years, but despite the proliferation of other metrics none of them have really caught on. (Note that we didn’t ask about enthalpic efficiency or SILE in 2011.)

So at least for now – and while fully acknowledging that all metrics are simplifications – I think we can conclude that most readers of this blog find LE and LLE both useful and sufficient for their needs.

(Full technical disclosure: the 2011 poll was run in Blogger, but the polling feature is buggy and has a tendency to lose votes. This poll was run using Polldaddy, but unfortunately the free version does not reveal how many individuals voted. Since respondents could choose more than one metric, the number of voters is impossible to determine from the results. I tried to account for this upfront by including a “Please Click this Box” to tally individuals, but only 77 people did so, less than the 91 people who voted for LE. I thus had to guess at the total number of respondents. The most conservative choice was to add 91 (the largest single category) to the 8 respondents who use no metrics, giving 99 independent voters. Obviously this might overstate the apparent percentage of people who use any given metric, but as 86% of respondents used LE in 2011 the effect is probably small.)
Posted by Dan Erlanson at 6:48 AM