Dan and I blog here because we love it; we don't get paid, it takes a lot of time, and has very little reward.  I love it when I meet someone new and they say, "Oh, I read your blog."  However, this allows us to have freedom to review what we want, when we want, and how we want.  We don't sell advertising, we don't generate revenue, and so on.  Sometimes people agree with us, sometimes they don't.  These posts are our opinions and like bellybuttons, everyone has one.  Sometimes, we get pinged by somebody who just published a paper and would really like to see us blog about it.  Sometimes we do, sometimes we already have and they missed it, and sometimes we don't.

I received a polite email recently, pointing out this paper.  It was already on my radar to blog about, so I bumped it up in the queue.  This paper caught my attention because it is a fragment screen against a DNA-target, specifically the G-quadruplex from c-MYC.  G-quadruplexes are found in the promoters to many oncogenes and the supposition is that by stabilizing them you can reduce their transcription.  It is an intriguing idea which has already been investigated with a number of compounds to date.  These authors decided to use fragments against the G-quadruplex without knowing if fragments would bind to a nucleic acid target with sufficient affinity and selectivity.  Their primary screen was an Intercalator Displacement Assay (IDA) which has been used previously to find G-quadruplex binding ligands.  A 1377 fragment library (@5mM) (previously used against riboswitches) was used and it obeyed the Voldemort Rule, had >95% purity, and 1mM aqueous solubility. The top 10 hits from this screen could be placed in three groups. 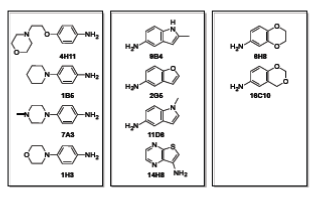 Then, in order to confirm their biochemical assay results they decided to dock them these top 10 fragments.  WHHAAAAT you say?  That was my initial reaction.  Why oh why doth they vex me so?  They then go into EXCRUCIATING detail about the docking results, even concluding from the results some SAR hypotheses.  I kid you not.  They also evaluated these top 10 fragments in a cellular assay (125um and 250uM) using a Western blot readout.  These concentrations were chosen in order to not show short or long-term toxicity, but Mirabile dictu, Data Not Shown.  All fragments, except two (7A3 and 2G5), showed significant changes in c-Myc expression levels. Interestingly, "no significant changes" still gives a 20% reduction in c-Myc levels. 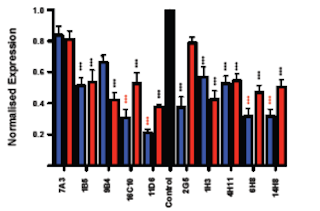 Four fragments were able to reproduce this effect, of which 11D6 was the best.  The four best were then run pair-wise to and every combination induced a significant reduction of c-Myc.

So what does this tell us?  Well, I think they have found fragments which bind to the c-MYC promoter G-quadruplex.  It may be exhibiting this binding in the cells.  There are a few experiments that I would like to see (and would have asked for if I had reviewed this paper): a binding assay (SPR, ITC, NMR, whatevs) being he primary one.  We also continue to know that docking really does not add anything to the discovery process.

AHHHHHHHHHHHHHHH!!!!!!!! Yet another fragment screen where the best hits are all compounds that you would not use in drugs. In this case these are all mutagenic anilines. The chemists will spend the next year and a half trying to find non-mutagenic replacements and spending mad $$$ on AMES screening. Eventually the program will be killed. But no one will say, "Hmmm. maybe pre should pre-filter our fragment deck." Oh wait, this is an academic group so they can just claim they are looking for "tool compounds"

I like the fact that they're using fragments to go after a tough target, but I have to agree with Teddy that more needs to be done to confirm that the fragments are behaving as proposed.

Anonymous also brings up a good point about the anilines, which are problematic beyond their potential mutagenicity. The really worrisome observation is that all the anilines are para-substituted with an oxygen or nitrogen, making them prone to oxidation to yield reactive quinone-type species. Even if small amounts of these form, they could account for all the activity observed.

Of course they know that anilines are mutagenic, especially when para substituted with EDG, but they included them in the library in an attempt to increase the hit-rate….. good proof of principles but useless

Dear All,
Thank you for your comments and feedback. You guys are expert in fragment-based-ligand design, so it is nice to see your feed-back on our work.
As we started with the fragment approach, we were young scientist never worked in this field before. We just realized that the tool compounds we were using to investigate the non-canonical G-quadruplex DNA were extended aromatic amines with low solubility in our cell studies. Therefore, we chose to go for a fragment approach to discover more soluble tool compounds. We found plenty of publications regarding classical targets such as proteins, however not much has been done to target DNA.
We actually have tested the top 10 fragments also in an secondary assay with an orthogonal read-out (SPR and NMR).
However, we have not show these data, because this will be part of a follow-up publication with a fragment growing phase.