Poll results: how small are your fragments?

The results of our most recent poll are in - here are the smallest fragments readers would allow in their library: 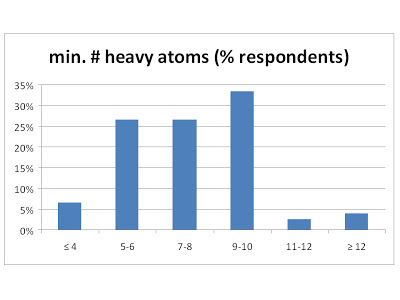 It looks like the smallest fragment most people would include in their library has a median of 7 or 8 non-hydrogen atoms, just slightly smaller than azaindole. More than 85% of respondents set a minimum size of 5 to 10 heavy atoms, so if we take the Pfizer rule of thumb that each heavy atom averages 13.3 Da, we’re talking 67 to 133 Da for the smallest fragments.

Our poll last year asked about the largest fragments, so together these polls set a range of 5 to 20 heavy atoms for typical fragment libraries.

Thanks to the 75 of you who voted in this most recent poll.
Posted by Dan Erlanson at 6:36 AM

So phthalic acid, heavy atom count 12, is not a viable fragment? Stop the presses, tell Zenobia to reconfigure their plates. Seriously, the simplest monosubstituted benzoate is going to be 10 atoms, and a nitrile... And since when have experienced early H2L guys been univariate in their perceptions (as if atom count was THE parameter that mattered). In my book (in preparation, TYVM), the matter is one of pharmacophores and not atoms, or molecular weight. E.g., I would love to see a designed library that included a stray tetrazole and sulfonamide, in careful array with the ordinary carboxylates (to deconvolute the lipophilicity axis from the pKa), etc., etc.). Signed, LeProf

This poll is for the minimum size of fragments, not the maximum - that was covered here.

By any reasonable standards phthalic acid would fit the size definition of a fragment, though including two carboxylate moieties in one fragment may raise some eyebrows.