Poll Results: Do you Need Structure

The poll question, Do you Need Structure To Prosecute Fragments is closed. We had 27 votes. 6 (22%) people voted for "Absolutely. No X-ray, no fragments." 6 (22%) voted for "Nope". And the majority 55% (15/27) voted for "Yes, but I am flexible as to what structure is." So, ~80% of the people who voted (self-selection?) think you do not need a X-ray structure to move forward.
So, what kind of methods can we put in the "structure" bin that is not X-ray? I think we need to define structure to get to that first question. In my eyes (and I hope this generates some dialog in the comments), structural information is data that informs on how the ligand and target interact. In my eyes, non-structural structural information is SAR without the guessing. Typical SAR: let's walk this methyl (hopefully its a magic methyl) around this ring, then ethyl, propyl, butyl, futile. Change the ring from phenyl to pyridyl...and so on.

Epitope mapping is one well established method to establish interactions between ligand and target.

I am partial to this, but I am an NMR jock. To me, this is as instructive as a crystal structure. It tell you which part of the molecule is in closest contact with the target, which aren't. It leads to imminently testable medchem hypotheses.
Hydrogen-deuterium exchange (HDX) is another method which could inform on the target side of the ligand-target interaction. 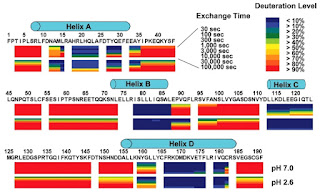 HDX is most robustly performed by Mass spectrometry, but can also be done by NMR (if the protein is amenable, blah^3). Is this a robust (and SENSITIVE!!!) enough method for routine mapping of ligand-protein interactions?
I ask this out of ignorance, not out of general gadfly-ness, but what methods do those people who are "flexible to structure" use to generate non-structure structural information?
Posted by Dr. Teddy Z at 8:41 AM

I agree that structures are helpful, but not essential. One of my favorite examples of advancing a fragment in the absence of structure was for FtsZ (see here). They actually did methyl, ethyl, propyl, butyl, all they way to nonyl, entirely bypassing futile!

It's easy to forget in these structurally rich times that people were inventing drugs long before any proteins were characterized by crystallography, let alone NMR. Following good old-fashioned SAR works well for membrane proteins, and to some extent it just takes an open mind to apply some of these same strategies to fragments.

Hope there will be some interesting comments on this poll. With limited experience and then only from having a second-site binders, I would prefer having ilNOEs between the ligands.

Or, as in one case of mine where there is a peptide-bound structure but no fragment-bound structures. Then I would consider NOEs for each fragment to the protein, that can be used for restraint-driven docking, very helpful. This might limit the chemistry effort required. But at some point you probably want to do some SAR by more "brute force" as well, to find out if you really got it right.

I go with STD NMR. In particular with fragments I found the risk of running into the spin-diffusion induced epitope rather limited.

I apply NMR protein labeled for frag. hits (parallel with x-ray) and it works perfectly for me. A bit expensive but certainly worth it. Crystallography with frag. is rather difficult, also they bind quite often without any sense which might be misleading.