The metabolic changes seen in cancer cells were first observed decades ago, but only recently have companies gotten serious about exploiting these changes for new therapies. One potential target is the enzyme lactate dehydrogenase, in particular the LDHA isoform. In a paper recently published in J. Med. Chem., Richard Ward and colleagues at AstraZeneca describe a fragment linking strategy to generate nanomolar leads for this enzyme.

An internal HTS campaign gave a hit rate of about 1%. Worse, none of these hits confirmed in ligand-observed NMR assays, and follow-up studies suggested that the activity was often caused by heavy metal impurities, particularly silver. (This is yet another form of false positive of which to beware.)

When HTS doesn’t succeed, fragments start looking more attractive, so the researchers used their NMR assay to screen about 1000 fragments in pools of 6, with each fragment present at 0.2-0.4 mM. This resulted in 44 hits; of the 27 of these chosen for follow-up 13 gave quantifiable binding, with affinities ranging between 0.3-4.2 mM. Happily, some of these (such as compound 12, below) could be soaked into crystals of LDHA, and structure determination showed these fragments bound in a pocket that normally binds the adenine portion of NADH. An SPR assay was developed and used to screen 350 analogs of some of these hits, and although some improvement in potency could be seen, ligand efficiencies remained more or less the same. (All Kd values in the figure below are taken from SPR data.)

The active site of LDHA is quite long, and so the researchers sought to span its length to obtain decent affinity. The adenine pocket where the identified fragments bind is located some distance away from the site where LDHA’s product lactate binds, and so linking fragments from both pockets would generate molecules spanning the desired region. Finding fragments that bind in the lactate pocket posed a challenge, however, as none of the first set of fragment appeared to bind there. Because lactate is negatively charged, the researchers assembled a specially-tailored 450 fragment library with a high proportion of acids and screened compounds at 2.5 mM using SPR. This screen resulted in 40 hits, and although many of them were nonspecific (they also bound to denatured LDHA!) some hits were specific, including compound 20. 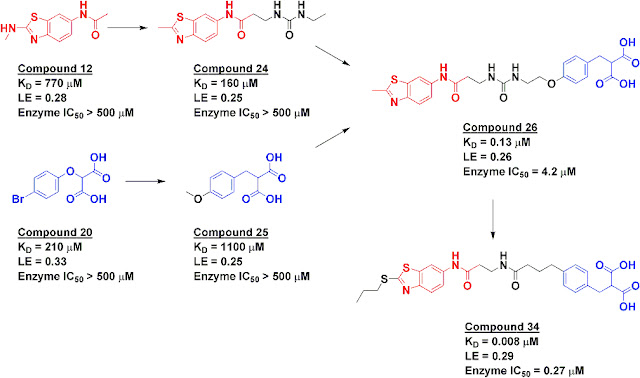 A crystal structure revealed that fragment 20 bound, as expected, some distance from fragment 12, so the researchers generated libraries around both fragments to try to help bridge the gap. About 150 analogs were made around compound 12 and about 70 analogs were made around compound 20, resulting in compounds 24 and 25. Although not necessarily more potent than the initial fragments, crystallography revealed portions of these that were positioned more closely to one another, and linking them to form compound 26 gave a very satisfying boost in potency. This was actually the first linked compound made, and it was also the first compound to show activity in the enzymatic assay. Subsequent optimization was able to drive the potency down to low nanomolar (compound 34). Not surprisingly, the acidic nature of the compounds precluded cellular activity, but some diester derivatives showed sub-micromolar activity.

This is a thorough and engaging account of how fragment-based methods can tackle a difficult target. Although the compounds still need work, they represent good starting points for further optimization and for better exploring the validity of LDHA as a cancer target.
Posted by Dan Erlanson at 6:51 AM