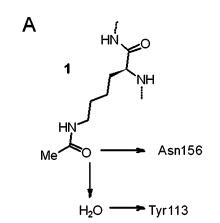 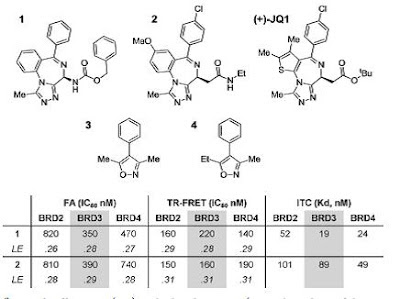 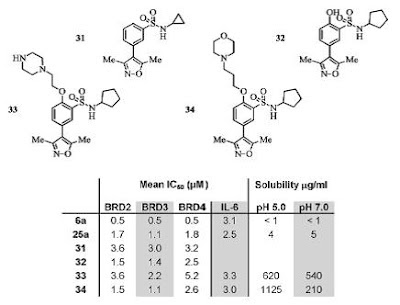 First paper: They use the common ligand of all the bromodomains as a template for their ligand library and then whine when their hits are unseletive? That's dumb. No wait, it's stupid. And that's being generous - any other day I would have said that it was moronic.

I disagree with Morten's assessment; there are plenty of examples of starting from non-specific fragments and getting to selective leads - see here for example. Concerns over selectivity haunted the kinase field for years, but many selective kinase inhibitors contain a non-selective fragment, and there is reason to expect the same will apply to other target families, such as bromodomains.

we actually published it before GSK:
http://pubs.acs.org/doi/abs/10.1021/jm200640v?prevSearch=brd4&searchHistoryKey=

Anonymous is right, but its first outing was in GSK's patents.

All comments gratefully received, even ones from Morten when he's having a generous day... We could have screened a diverse fragment set. In fact we could have done both, but we mightn’t necessarily feel the need to publish both together...

What I don't understand is where he got the impression we were whining about selectivity. I see it as a positive thing if multiple targets you’re interested in can all bind the same scaffolds, provided you can discover how to tweak them for each one. In the first draft I made a lot more of Dan’s kinase analogy but my co-authors persuaded me to tone it down a bit…