One of the most well-known examples of a fragment-based program that has yielded a clinical compound is Abbott’s Bcl-2 effort: ABT-263 is currently in over a dozen trials for various cancers. However, this molecule hits several proteins in the Bcl-2 family, and a more specific inhibitor of Bcl-2 alone may have lower toxicity. Phil Hajduk and colleagues have used SAR by NMR to do this, as they report in the latest issue of Bioorg. Med. Chem. Lett.

The researchers started with a protein-detected NMR screen of 17,000 compounds; compound 1 (see figure) was found to be fairly potent, and also roughly 20-fold selective for Bcl-2 over the related protein Bcl-xL. Hajduk’s team did not have a crystal structure at this point, but they were able to use NMR to determine that the compound lies in a large hydrophobic groove. This is the same groove found to bind biaryl acids in earlier work, so the researchers screened a set of 70 of these to see if they could bind in the presence of compound 1. Interestingly, compound 6 was equally potent in the presence or absence of compound 1, suggesting that both fragments could bind simultaneously. 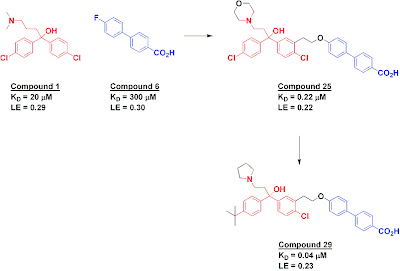 NMR was then used to determine the ternary structure of fragments related to compound 1 and compound 6 bound to Bcl-2, and linking these led to compound 25, with high nanomolar potency. Although this represents a good boost in potency, the binding energies were not additive (let alone synergistic). An NMR structure of one of the linked molecules revealed that, although it binds in the same groove as its component fragments, its position is shifted, and also that one of the protein side chains moves to deepen a hydrophobic pocket. Additional chemistry to fill this pocket led to compound 29, with 40 nM biochemical potency and measurable cell activity, as well as greater than 1000-fold selectivity for Bcl-2 over Bcl-xL and at least 28-fold specificity over other Bcl-2 family members.

This is a nice example of starting with a modestly selective fragment (albeit a jumbo-sized one) and, through fragment linking, increasing both the potency and specificity towards the target protein.
Posted by Dan Erlanson at 8:15 AM