Fragments vs renin: growing this time

Renin is a key player in the regulation of blood pressure, and thus an important therapeutic target for hypertension. Indeed, the approved drug aliskiren is a renin inhibitor. However, this drug has very low oral bioavailability as well as other problems – surely something better could be developed? This was the goal of a team of researchers at Takeda, described in two recent papers in Bioorg. Med. Chem.

One challenge with renin is that it is an aspartic protease with a large active site – similar to the difficult target BACE1. Like BACE1, fragment-based approaches proved to be useful. In the first paper, Michiko Tawada and colleagues conducted an enzymatic screen (at 100 µM) of their fragment library. Although this library contained many positively-charged fragments – which would be expected to interact with the negatively charged catalytic aspartic acid residues – none came up as hits. Neutral compound 1, however, was identified, and crystallography revealed that it binds in the hydrophobic S1, S3, and S3sp pockets. Novartis researchers published a similar experience several years ago.

Compound 1 was poorly soluble, lipophilic, cytotoxic, and offered suboptimal vectors for fragment growing, so the researchers sought an alternative by constructing and testing a library of analogs. Compound 4a had a similar affinity to the initial fragment, and crystallography revealed a similar binding mode. This was used as the core of a second library, leading to compound 6b, which also displayed a similar binding mode to the initial fragment. Although the affinity was similar (and indeed, the ligand efficiency was lower), the new fragment had better physicochemical and biological properties. It was also more synthetically tractable for subsequent optimization, which is the focus of the second paper. 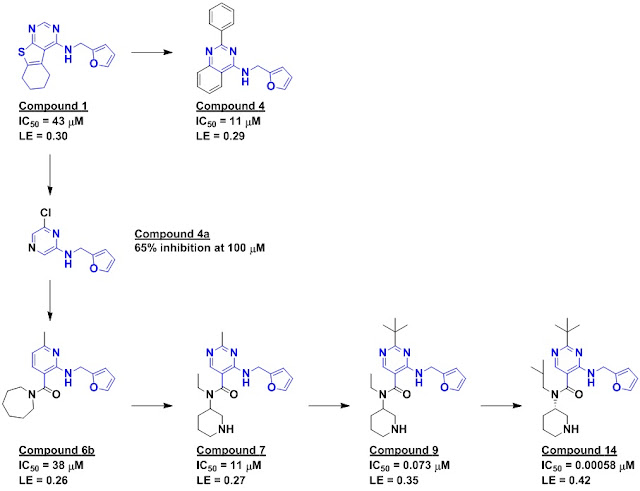 As with the initial fragment, compound 6b did not make interactions with the catalytic aspartic acid residues, though they are nearby. By redesigning the compound and introducing a basic nitrogen in compound 7, Yasuhiro Imaeda and colleagues were able to engage these residues. Also, the crystal structure of compound 4 (top) revealed that a hydrophobic substituent would be tolerated, which led to compound 9, with nanomolar affinity. Further growing into a hydrophobic pocket led to compound 14, with high picomolar activity. This compound was active in human plasma, showed excellent selectivity against other aspartic proteases, and exhibited encouraging bioavailability and pharmacokinetic properties. The paper notes that this molecule has been optimized further.

For me, the most striking lesson from these two papers is how much effort it took to improve the potency of the initial fragment hit: lots of analogs were made without notable improvements, and it would have been easy to give up. But in the end, a combination of managed serendipity and careful structure-based design increased the affinity by 74,000-fold to a promising lead. Something to keep in mind the next time you find yourself lost in a forest dark, where all paths seem to lead to dead compounds.