With 16 days left to vote (Use you franchise!!!) 17 of 20 respondents have said that FBDD is integrated in the hit finding stage at their companies. WOW! and Awesome!
Lorenzo Williams posted a discussion topic on one of the LinkedIn groups (I of course forget which one) asking how many chemists does your company use for going from Hit to Lead. Below are the answers he shared with me...

Of course, the proviso was that it all depends on the complexity of the project. My question to this group, since we know so many of your have integrated FBDD in the hit finding stage, is: "Are FBDD based hits resourced differently than non FBDD hits?"
Posted by Dr. Teddy Z at 5:05 AM No comments:

Teddy recently observed that it’s not the size of your library that matters, but how you use it. But how do you get a fragment library in the first place? You can of course build one up from scratch, but it may be easier to just buy one. Last year we put out a call for sources of commercial fragments and received some good comments. There are now some new suppliers of which we’ve recently become aware, so an updated list follows.

Does anyone have any experience using any of these? Are there others we’re missing? Let us know or post comments – anonymously if need be!
Posted by Dan Erlanson at 6:47 AM 3 comments:

Boys will be boys, won't they. There is some gene buried on the Y chromosome that makes them think if something works as is, the bigger you make it the more success you will have. I bring this up because as we all know, many companies are slow to pick up FBDD; it is typically the "Hail Mary" pass, so success is slow in coming, as is uptake of the method as a primary tool. But once there is success, everybody jumps on the bandwagon. So, then the "crappy" little library you had needs to be increased in size (because obviously that's why it wasn't deliver superdrugs before); thank god for the medchemists!!!

So, what is the optimal size of a fragment library. 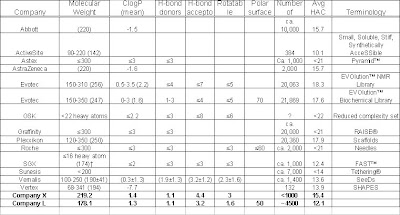 This is a table put together by the Good Folks® at Evotec for this fabulous book, with some added data bny the Editor of said Tome. What does this show us? FBDD libraries range all over in size. They obviously know something. What do they know?
No matter your screening paradigm, fragment hits need to be confirmed by an orthogonal method. So, even though you can blow through 50-100k compounds by a biochemical screen, you are still limited by your ability to confirm the hits by NMR or SPR or whatever.
If you don't think you need orthogonal methods (and really you do?) then your fragments need to be whistle-clean, because even low level impurities screened at 1-10mM can negatively impact the results of the screen. So, you think you have 10k-50k whistle-clean compounds?
Then, comes this [Shoichet and Austin (J Med Chem. 2008 Apr 24;51(8):2502-11)]. Aggregators!!!
Egads, it's like the Vikings crashing across the North Sea. So, to filter them out, you still need an orthogonal method(s).
So, creating massive (relatively) fragment libraries because you can screen them biochemically cheaply and quickly, doesn't buy you anything, because you still need to confirm them (typically by the same methods you chose not to use in the first place).

Fragment linking: too strained, too flexible, or too positive?

One of the most rewarding fragment-based outcomes is to link two fragments together and get a pop in activity, as predicted by William Jencks almost three decades ago. Unfortunately, all too frequently linking two fragments gives a less than additive boost in binding energies, and often it doesn’t work at all. A new paper from James Stivers and colleagues published in Nature Chemical Biology investigates why.

The authors had previously discovered bipartite inhibitors of the DNA repair enzyme uracil DNA glycosylase (UNG): one piece of the inhibitor was fixed as the substrate uracil, and the other piece was chosen empirically from a library of fragments; the two fragments were each attached by rigid oxime connectors to a flexible linker. A crystal structure of one of these inhibitors bound to UNG showed that the uracil fragment does indeed bind in the uracil-binding pocket, while the other fragment binds in a nearby phosphodiester-binding pocket. However, the linker exhibited an unusual kink, suggesting it might be strained. The researchers have now followed up on this observation to explore the effects of varying the linker.

Four of the molecules made and tested are shown below; these vary only in how fragments connect to the linker. Importantly, the authors were able to determine co-crystal structures of all of these molecules bound to UNG. The most potent molecule, MA1, has a (flexible) secondary amine connection to the uracil fragment and a (rigid) oxime connection to the benzoate fragment; the linker appears unstrained in the crystal structure. In contrast, although the two fragments of DO bind in the same manner as the two fragments of MA1, the linker assumes the apparently strained “kinked” conformation previously observed, and the molecule binds with a thirty-fold lower affinity. In the case of the other two molecules in this set, the uracil fragment still binds as expected, but the benzoate is either not visible in the electron density (MA2) or binds to a nearby molecule of UNG in the crystal (DA). Both of these molecules are weak inhibitors, with IC50s comparable to that of uracil connected to the linkers alone, without the benzoate fragment (700-750 micromolar).

The authors argue that the greater linker flexibility in MA1 compared to DO reduces linker strain when the two fragments assume their optimal positions. They also suggest that the effect of the linker on the tighter-interacting uracil fragment will be less pronounced than on the more “loosely interacting” benzoate fragment; uracil’s specific binding interactions are able to overcome linker strain, while the weaker benzoate requires more precise positioning. In other words, the flexible connector to the uracil and the rigid connector to the benzoate give a Goldilocks-type situation for MA1.

This is reasonable. But there may be more than strain and flexibility at work here. In particular, introducing a (positively charged) secondary amine near the benzoate may have a considerable electrostatic effect on binding. The authors consider this possibility unlikely, and provide some evidence against it, but given that this enzyme binds to negatively charged DNA, I can’t dismiss it. Although the linkers are solvent-exposed, the electrostatic surface of UNG is quite positive, and in fact the benzoate linkage is not far from a histidine residue. It would be interesting to see whether replacement of the oxime linkages with similarly uncharged ethers or methylenes has the same effects as the amines.

Still, this type of systematic analysis is a valuable experimental addition to the field of fragments. I hope someone will do high-level computational modeling on these complexes to try to further dissect the origins of the differences in affinities.
Posted by Dan Erlanson at 9:52 AM No comments:

A few weeks ago, we highlighted a paper from Brian Shoichet’s group at UCSF demonstrating that computational screening could successfully identify fragments binding to a protein target, and that the binding modes predicted were actually observed experimentally. A companion paper just published online in PNAS now extends these results, and also beautifully illustrates that it is possible to cover much more chemical space with fragments than with lead-like molecules.

Denise Teotico, Shoichet, and colleagues used the program DOCK 3.5.54 to screen 137,639 fragments against AmpC beta-lactamase, a bacterial protein responsible for antibiotic resistance. The protein had previously been the target of HTS and computational screens of drug-like like molecules. The computational screens had modest success rates (2-7%), but the HTS screen was a total bust: of the more than 1200 hits from the 70,000+ compound screening collection, more than 95% of these turned out to be false positives, mostly aggregators, with just a few dozen true inhibitors, all of which turned out to be covalent (irreversible).

In contrast, of the 48 high-scoring fragments that were experimentally tested, 23 had Ki values better than 10 mM, for a hit rate of 48%. The authors also assessed potential for false negatives by choosing 20 random fragments and testing these for inhibition; only one showed inhibition (with a Ki value of 3.1 mM), and this molecule had scored in the top 5% of docked fragments.

The paper presents a fascinating empirical test of the Hannian chemical complexity hypothesis. Starting with the 23 active fragments, the researchers calculated how many lead-like molecules (up to 25 non-hydrogen atoms) could contain these fragments. Of the roughly 47,000,000,000 to 430,000,000,000 possible lead-like molecules, only 675 are commercially available. By repeating this analysis with fragment-sized molecules (up to 17 non-hydrogen atoms), the size of the haystack was reduced by six orders of magnitude: only about 10,000 possible molecules contain these fragments, of which 93 are commercially available. Moreover, many of the active fragments represent unique chemotypes not previously observed in AmpC inhibitors. As the authors note:

The chances of discovering interesting chemotypes for biological targets is many orders of magnitude higher when targeting molecules in the fragment weight range than even at slightly higher size ranges.

A notable feature of the fragments is their relatively poor ligand efficiency: with one unusual exception (a phosphinate), all of the active fragments have ligand efficiencies less than 0.3 (kcal/mol)/atom. AmpC has a large, open active site, and the authors suggest that the failure of other hit-ID methods against this target may reflect issues such as solubility.

It remains to be seen whether these fragments can be advanced to low nanomolar inhibitors, but at least fragment-screening has provided many new starting points. And the paper demonstrates, once again, that triaging a fragment set computationally can be an effective means for concentrating the needles in a haystack.
Posted by Dan Erlanson at 1:09 PM No comments: