NOTE: Blogger blew up my post when I published it.  I have fixed what I can.  Blogger keeps on blowing up this post after I edit it.   I have removed what I think may have been causing some of the problems.  This post should be considered in "Wiki-ese" as a fragment.   Thankfully, the summary was unaffected.

As I recently said, GPCRs are a theme around here, so this post will talk about work published last year by the folks at ZoBio and Heptares.  [In terms of full disclosure, I had a business relationship with ZoBio until recently.]  This work is also on STaRs, the stabilized GPCRs developed by Heptares.  I noted my concerns with this approach here.  These two papers focus on A2A GPCRs, while previous posts here were on A1A, A3A, and B1A GPCRs.

In the ACS Chemical Biology paper, the authors are using TINS to screen an antagonist-stabilized A2AR StAR.   The immobilized protein showed a ~50% greater retention in activity after 5 days at 4C compared to the native protein in membranes (60% vs. 30% binding competency).  So, immobilized stabilized protein is more stable than non-immobilized, non-stabilized protein.  They then took a subset (531 compounds) of the ZoBio fragment library picked for maximal chemical and shape diversity and screened using OmpA as the reference protein. As shown in the bucketing below the vast majority of the compounds cluster around a T/R of 1.  This indicates that they have a slight preference for the target or the reference. The used a T/R cutoff of less than 0
. aromatic and aliphatics.  Additionally, the use of the logarithmic plot for the bucketing obscures the spread around T/R=1.  I have never seen a discussion from the creators of TINS discussing the relative error of the method and how to best evaluate the screening data.  In this case, they chose a 0.7 cutoff because there appears to be a discontinuity in the data there.
They followed up on these (see Table 1 in the paper) as orthosteric hits by observing if they can inhibit binding of an inverse orthosteric agonist in a radiolabeled assay using WT A2AR in HEK membranes; five fragments inhibited binding by >30% at 500uM (see below). 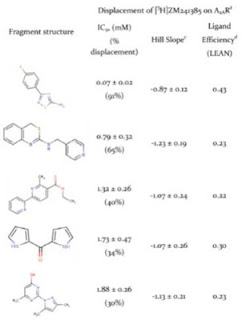 This data in conjunction with the TINS data shows the compounds bind reversibly with a 1:1 stoichiometry.  These fragments also inhibited A1AR, which would not be unexpected for such small molecules.  However, 3 of these compounds have poor LEAN values >0.3.  This is particularly poor for GPCR targeting compounds. 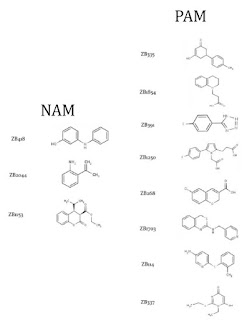 Four additional fragments either one or the other of the inverse agonist or agonist used.  The two most potent AM appear to have some subtype specificity (A2AR over A1AR).  When they tried to test these compounds in a cell-based assay, toxicity was observed so no data could be collected.

In summary, the authors show that TINS is productive in finding fragments that bind to GPCRs.  However, they have to rely on standard biochemical assays for follow up.  It would have been nice to see at least one other method used to verify the active fragments, like SPR.  What I really like is that they did the biochemical assays against WT, which does not necessarily alleviate my concerns about screening against a mutant.  I would have really liked to see a comparison of the biochemical data in the STaR and WT.

So, while people say 30% of marketed drugs target GPCRs, I can assure you 30% of all of our posts are not about GPCRs.

And it is STILL doing it.

The TINS work is quite nice, and, perhaps in contrast to some of the papers discussed earlier, seems capable of detecting lower-affinity fragments too. Not that you want low affinity, but for some targets that's all you can expect to find!

The part of my blog that got blown up is re-created (mostly) here:
http://www.quantumtessera.com/rank-ordering-1h-nmr-data/