Undruggable? Pshaw, Fragments can do it.

Bromodomains, as well as other epigenetic targets, are hot right now.  This paper adds to the growing library of fragment success against bromodomains.  As in any nascent field, some of the targets do not have a known biological role.  BAZ2B (bromodomain adjacent to zinc finger domain protein 2B) is one of these.  BAZ2B is interesting compared to the 41 other bromodomains where there is structural information.  Its KAc binding pocket is smaller than other bromodomains (92-105 Angstrom vs 130-220 Angstrom for the other bromodomains and lacks features of BET bromodomains, like the ZA channel and the hydrophobic groove adjacent to the WPF motif.
Due to these structural differences, the strategies that have been applied successfully to other bromodomains will not transfer to BAZ2B; thus, it considered one of the least druggable bromdomains.  Hence, fragments to the rescue!

They screened 1300 commercially available (and thus Voldemort Rule compliant) with an alpha screen with hits being defined as 50% activity at 1mM.  10 compounds were identified and confirmed using STD, Waterlogsy, and CPMG NMR experiments (0.8% hit rate). 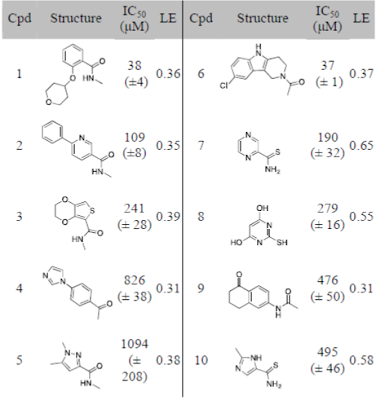 (The same library was screened against BRD2-BD1 and CREBBP and had hits rates of 1.8% and 6.1% respectively.)  The ten fragments were then soaked into BAZ2B crystals yielding structures for 1,3,6 and KAc.
Fragment 6 had poor solubility, so direct ITC was not possible, instead a competition ITC study was used and yielded a 65 uM Kd.  They attempted to optimize this fragment from the 1 position of THgammaC.  All of these modifications resulted in worse affinity.  They then attempted to replace the Chlorine with aryl substituents (based on modeling results).  These compounds showed some improvement in solubility, but no significant improvements in affinity.  They then tried to change the electronic properties of the aromatic substituent.  EWG showed the expected reduction in affinity, but EDG did not show an increase in affinity.

The most ligand efficient fragments (7, 8, and 10) all contained thioamides, so they synthesized thioamide and thiourea analogs of fragment 6.  Both of these molecules did not bind to the protein. Finally, they attempted to merge 3 and 6 putting the KAc mimetic on the scaffold of 6 . 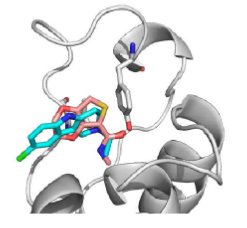 This urea containing compound (40) showed improved solubility, and 8-fold reduction in Kd, and a corresponding increase in ligand efficiency.

This paper is a nice story of using fragments, structural biology, and modeling to generate useful compounds as tools.  I think it also points to "druggability" being a useless term when it comes to fragments.  Archimedes may have wanted a lever long enough, but for me, I just want fragments diverse enough.
Posted by Dr. Teddy Z at 6:02 AM

I coauthored the bromodomain druggability paper that the authors here cite, and one of the points that we made was that most bromodomains would be able to bind a fragment due to the homology in the base of the binding site that recognises the acetylated-lysine. The differences in druggability between the bromodomains we suggest relates to the ease of optimizing the fragment. This is consistent with the observations here that the fragments against this bromodomain were challenging to optimize.

Another point that we made was that all bromodomains are more druggable than many other PPIs. This is the reason we used the term difficult in the paper, not undruggable.

Lewis,
Thanks for the clarification. That is very interesting.

Besides, Lewis had access only to apo structure at the time. If we repeat now, the score would be different I believe. It shows that any computational tool gives assessments of the available information, not the target itself.

Do these compounds work as PPI?