In this paper, Li et al.  report the first use of FBDD on Rho Kinase (ROCK).  ROCK 1 and 2 are involved in several pathological diseases.  These researchers (not in pharma) started their efforts aiming to target the hinge region of the ROCKs with 7 pyridyl containing compounds.

These compounds were tested at 400 uM .  Cpd 3 (nicotinamide) had IC50 of 76 and 56 against ROCK 1 and ROCK2, respectively.  The Ligand Efficiencies (LE = DeltaG/HA) were 0.37 and 0.39.  The authors note that they used LE as a general guide during the optimization process.  While not uncommon, it is nice to see more and more people explicitly stating this.  Cpd 4 and 5 had reduced activity compared to Cpd 3 which suggested to them other potential hinge binders. 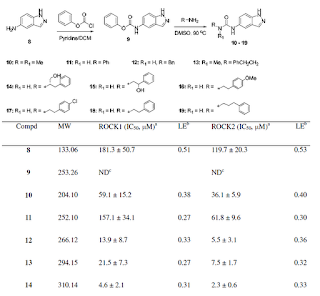 Cpd 10 had good potency, 59 and 36 uM respectively.  Cpd 12 was previously reported as a ROCK 2 inhibitor at 260nM.  The authors state that the discrepancy is due to differences in assay conditions.  However, no two-carbon spacers had been reported, so they decided to pursue this avenue.  The ethylene spacer (Cpd 18) proved optimal (0.65 and 0.67 uM, 0.40LE).  However, modeling suggested that it was not fully utilizing all possible hydrogen bonds.

In order to exploit all possible hydrogen bonds, they used Cpd 20 as an alternate hinge binder.  As they started to explore this chemistry (Cpds 22-27), the pyridines were published in a patent.


They then probed the chirality of the molecules, Cpd 24 (S configuration) was 75x more potent than Cpd 23 (R) for ROCK2, but only 5x for ROCK1.  Fascinatingly, adding one more carbon to the spacer (Cpds 26 and 27) reverses this preference.

They then tested two pairs of compounds in cells (11/18 and 23/24).  They showed activity in the cells that correlated with the in vitro data.

This is good example of academic drug design, but is raises some questions: 1. is selectivity for ROCK1 and ROCK2 important, 2. are these compounds in a clear IP space, 3.  Why weren't the other compounds (like 23/24) crystallized, 4. What is the basis for the chiral preferences with a linker length dependence?

There is some nice stuff here, but as noted in the first comment (and also by Li et al.), this publication is not the first application of FBLD to this target – Peter Ray and colleagues at the former Organon site published two papers last year (here and here). Paul Bamborough and colleagues at GlaxoSmithKline previously reported that indazole fragments were good ROCK inhibitors, and Irini Akritopoulou-Zanze and colleagues at Abbott also found ROCK inhibitors using a scaffold-based approach. Still, I do agree with Teddy that it is nice to see increasing uptake of fragment-based approaches in academia, and in particular the use of both ligand efficiency and crystallography.

I would like to point out that it was not my assertion, but the authors.