Here’s a summary of the latest poll.

Readership demographics have not changed significantly since 2010, aside from a slight shift towards industry (~58% today vs 51% in 2010).

The next question asked about screening methods, and here things get more interesting. 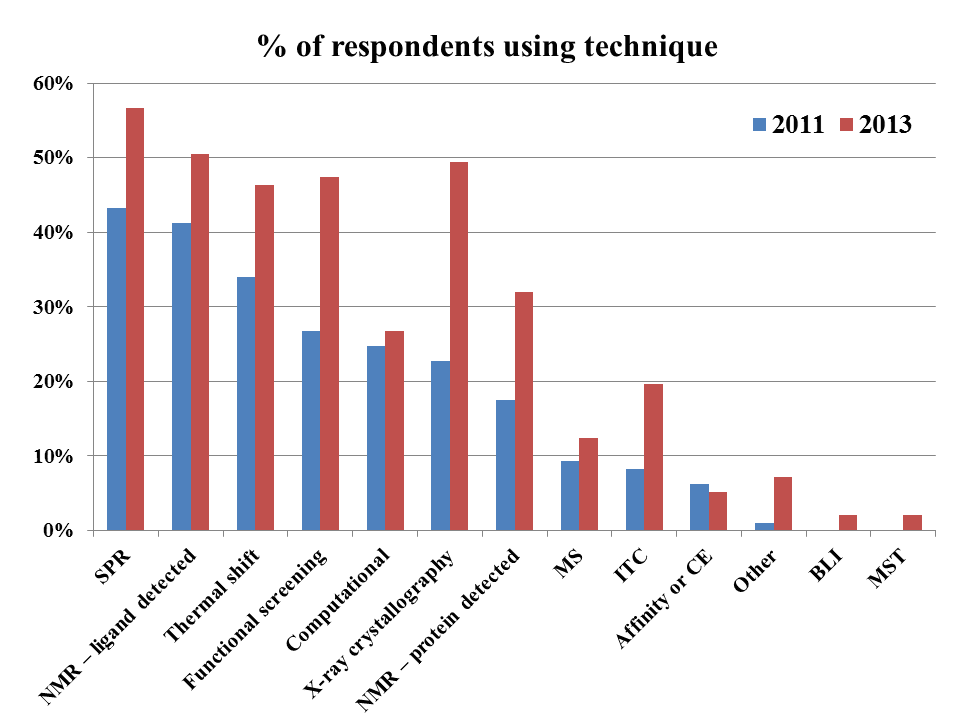 The first thing to notice is that, with one minor exception, most fragment-finding techniques are being used more, with SPR and ligand-detected NMR now being used by more than half of all respondents. As a consequence, the average number of techniques being used jumped from 2.4 in 2011 to 3.6 in 2013.

The overall order of popularity doesn’t seem to have changed much, the major exception being X-ray crystallography, which is way up. However, this may be an artifact; a comment on the 2011 poll suggested that some voters interpreted the question to be about primary screening methods, as opposed to all methods.

(Technical disclosure: feel free to skip this paragraph unless you’re a data geek. Due to issues with polling in Blogger, this year’s poll was run in Polldaddy, the free version of which gave total votes for this question but not the number of individual respondents. However, since the two other questions in the poll allowed only single answers, the number of responses was equal to the number of respondents: 95 for the demographic question and 97 for the library question below. I thus assumed 97 respondents for this question, which is coincidentally identical to the number in 2011. Note also that the categories BLI and MST were new for 2013.)

Finally, the question on fragment library size shows that most folks are using libraries of 1000-2000 fragments, with only ~10% of respondents using very small (≤500) or very large (≥5000) collections of fragments. 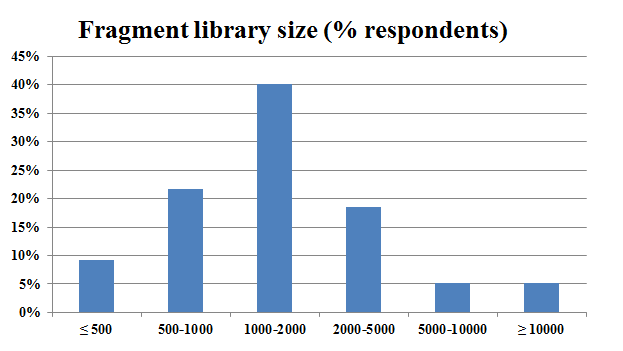 This result is strikingly similar to the median of 1300 fragments that Jamie Simpson, Martin Scanlon, and colleagues found in an analysis of 22 published libraries. Teddy’s notes from FBLD 2012 put the median slightly higher: around 2500 for 17 libraries. Perhaps people with larger libraries tend to broadcast their size? Of course, in the end, it’s not the size of your library that matters; it’s what’s in it, and what you do with it.

Thanks again for participating, and if you have ideas for new polls, please let us know.
Posted by Dan Erlanson at 6:34 AM